Out at the Movies Group to See Film "Mr. Gay Syria" at Jacob Burns Film Center

Posted by Katharine Andriotis 52sc on 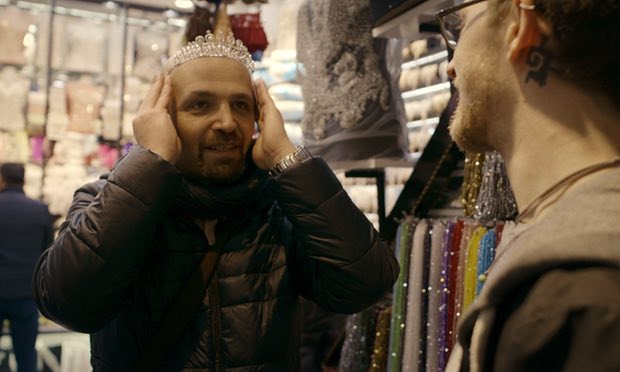 Part of the JBFC

Set in Istanbul and Berlin, Mr. Gay Syria follows two exiled Syrian gay refugees who are trying to rebuild their lives. Husein is a married father who lives a double life in Istanbul, and Mahmoud is the founder of Syria’s LGBTI movement and lives in Berlin as a refugee. By signing up for the Mr. Gay World contest, Husein reveals himself and hopes his family can come to terms with his identity. For Mahmoud, it is the means to launch a campaign for visibility for all Syrian gay refugees.

In a breathtaking Sahara desert landscape in western Algeria lies the mining town of Bechar. Here, an illiterate and singularly talented sexagenarian, Hasna El Becharia, leads a group of Algerian women of all ages to learn and perform the traditional music of the Gnawa ceremony and culture, in spite of an age-old prohibition against women as Gnawa artists.

Algerian filmmaker Sara Nacer is founder and president of the arts & films production company SN Productions, and a public relations specialist. She is co-director of the Greenhouse work-in-progress feature documentary La Rockeuse du Désert, and currently living and working in Montreal, Canada.

Mexican filmmaker Laura Bustillos is a documentary filmmaker and photographer from the Ciudad Juarez border sister city of El Paso, Texas, where she currently developing a film series Undocumented Freedom, and is co-director of the Greenhouse work-in-progress feature documentary La Rockeuse du Désert.

Turkish filmmaker Ayse Toprak is based in Istanbul, working on social and political documentaries about her country. She has produced films for Channel Thirteen/PBS and Al Jazeera in London and Doha, and is co-director of the Greenhouse work-in-progress feature documentary Mr. Gay Syria.

Turkish filmmaker Ekin Çalışır has worked at Al Jazeera Turk as a journalist and producer of short documentaries, and has produced international news and current affairs for the Turkish Radio and Television Corporation. She is is co-director of the Greenhouse work-in-progress feature documentary Mr. Gay Syria and is currently directing the Greenhouse documentary Babyland.