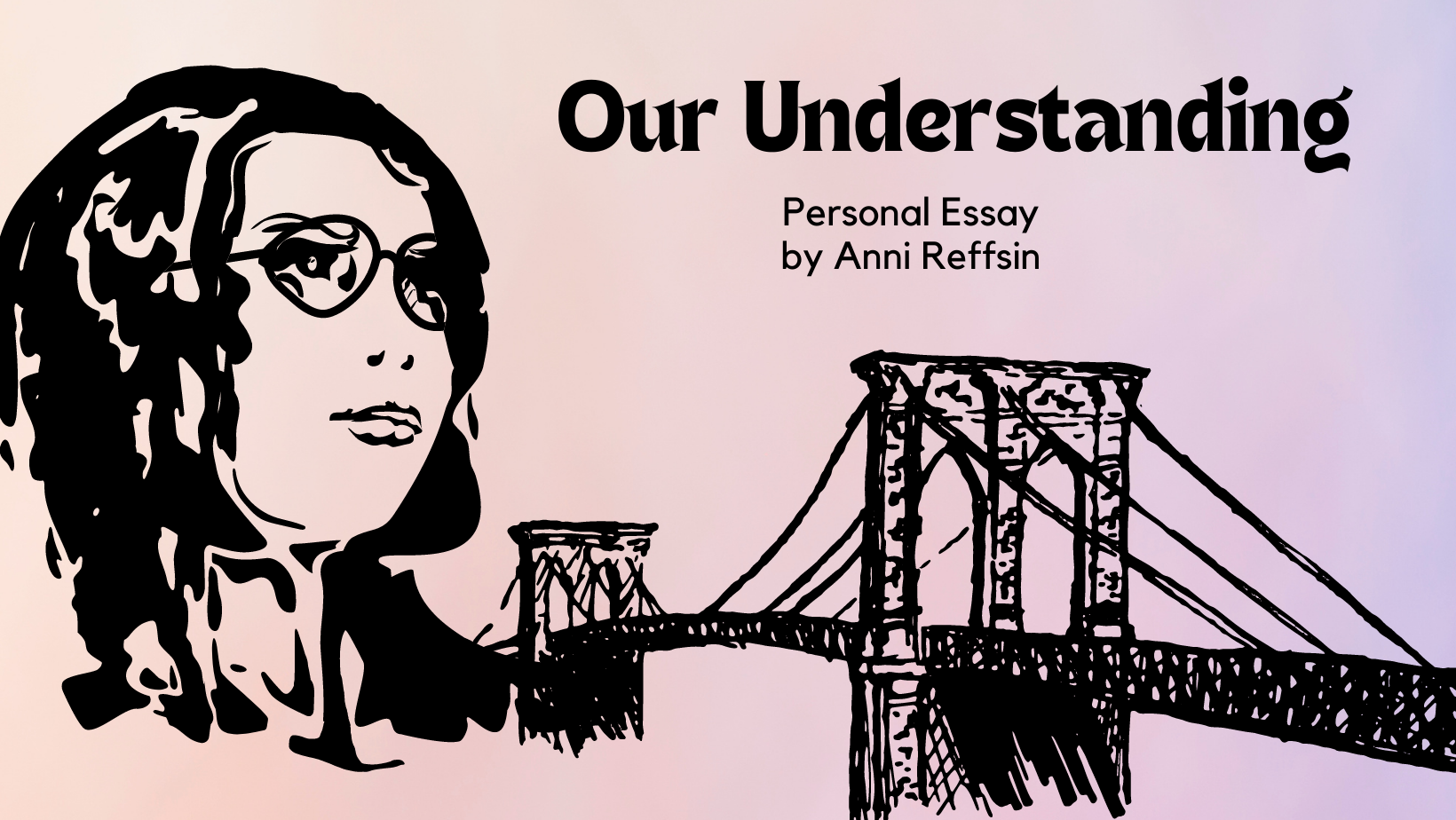 My mother decides to celebrate the occasion by inviting her long-time close friend, Edie- whom I had known all my life as an “Aunt.”

We meet in Manhattan, the three of us, and decide to walk across the Brooklyn Bridge. My mother isn’t the best at walking, a perpetual inability to move forward. My Aunt believes in the “Move-it or Lose-it” motto and has a gym membership to Crunch Fitness.

My mother struggles to walk across the bridge while my Aunt forges ahead, and like a magnetic plurality, I stay in one spot, waiting for my mother to catch up to me, until my Aunt returns. My mother catches up and we stand together as waves of people crash into us from behind. The sky fills with navy blue- but we are looking for the flash of red hair which indicates Edie.

Edie returns an hour later. She's confused as to why we didn’t walk with her; why were we on the Manhattan side rather than the Brooklyn side? I was confused: why did she cross over when she knew I’d wait for her here?

Two weeks later she is diagnosed with brain cancer.

My Aunt has lots of opinions; my favorite of hers: “White people are like white flowers, they wilt.” My Aunt is a horticulturist who is white.

She lost all her hair in chemotherapy.

On my wooden kitchen table, she carefully places her foundation, mascara, blush, lipstick, and bronzer. With her first finger and thumb, she paints herself. On the back of each of the products is a symbol “CC” interlocked- the Chanel symbol.

The Museum of African American History opens up in Washington, D.C. It is the place to be. My Aunt and I get tickets through a friend. Edie is self-conscious, wondering if we only got tickets because of her impending death.

I don't know what the right answer is but I tell her what I think is the truth, “Yes.”

In hindsight, perhaps I should have lied.

We have lunch. It is the most ostentatious lunch I’ve ever had in a museum. I’m thrilled. There is so much history and guilt and complex nuance issues in this building- the food is no different. The food is heavy and stabilizes my body and my mind. I remember the apple pie. I remember Edie looking miserable.

She’s self-conscious. She’s looking at everyone in paranoia.

She whispers to me, “Everyone is looking at me.”

I have a spoonful of apple pie, “I don’t think they are.”

Edie is wearing a hat. She went wig shopping and hated the wigs. I hate wigs. There are the synthetic wigs which are the equivalent to wearing a plastic bag on your head- they also have the terrible white sheen to them which makes it obvious that it’s a fake. Then there are the “real” human hair wigs, which are also terrible because of the way in which human hair is obtained (human trafficking- most hair is from India). The idea of wearing someone else on top of your head is atrocious.

I have never dyed my hair. My hair is black and painfully straight. I spent too many hours dyeing my mother’s hair that I find a beauty salon repulsive. Additionally, for $100 I’d rather have an orgasm than have my hair done- but pleasure is pleasure, I suppose.

Edie and I leave the museum.

The summer that I’m 21, I spend 6 weeks with Edie. I have an internship in Washington, D.C. working in textile conservation. The conservator lives within walking distance of my Aunt’s house.

Edie has grown some hair, no longer can I see the scars from the operations she’s had. I have a scar, right down the middle of my chest from open-heart surgery. The chest seems to be a point of dysphoria for all genders and non-genders. I could be more self-conscious of my scar- but I don’t think it would do me any good to hem and haw over it; it just is. Sometimes the dresses and tops I wear reveal the scar- I’d like to think it says something fierce about me. An acquaintance of mine once said enviously, “it’s like you have built-in cleavage.” I glared. Yes, I had this open-heart surgery just so I could look “aesthetic.” How fucking superficial and incredibly insensitive.

Edie decides to dye her hair blue. It’s layered and multicolored. She says that black women love her hair the most. Edie glows. She finally feels some autonomy over her body- over her life.

I can see how the unconscious desires melt into the conscious. How the trauma of brain cancer- or the brain cancer itself- makes it so she’s unable to censor.

She frequently calls me her “daughter” to my mom.

“When is my daughter coming to visit?” was the proposition before the summer.

And when I visited, she called me her “China doll.” I don’t correct her. It’s certainly not politically correct- but perhaps the most affectionate term I’ve ever heard. It feels beautiful to belong to her.
She asks if she can adopt me.

I tell her that I’m over 18- that I’ve already been adopted- that I don’t have an impairment that renders me incapable of taking care of myself. She laughs and then sighs. She puts on “Mrs. Miniver,” falling asleep to her favorite film.

My Aunt has been with women; our bisexuality is something we have in common.

Edie tells me to go out and bring a girl home to fuck on the dining table.

The dining table is made of marble. The legs have wheels. This seems like a dangerous assignment.

I do what she says. I go downtown to where the clubs and bars are. Between 10-midnight I am unsuccessful in the goal. A little after midnight, I meet someone. We go to the Black Cat and stay until we get kicked out at 4 am.

Her name is Coco. I kiss her. She kisses me back. Her lips are full and warm. I love drinking in her saliva. She pulls me close.

And then we’re harassed on the street, by “some man” who is incredibly threatened and fragile. Coco takes care of the situation by telling him to, “go away.” Coco and I continue kissing.

The man continues to interrupt. Coco is frustrated at having to expend energy at correcting his misogyny. She yells at him. Attention is still attention.

Coco and I decide to part ways. We take separate cars, returning to our homes.

In the morning Edie doesn’t ask where I’ve been. She’s forgotten.

My aunt sees my millennial pink raincoat and decides that it’s hers. She never returns it. I figure that I’ll eventually get it back.

It’s February. She’s had the coat for 5 months. The morgue people are in the living room taking her body out to wherever the state puts dead bodies.

I’m in her bathtub, laying down. I decide that it’s in my best interest to not know how the body of someone you love exists without the spirit.

When the voices outside of the bathroom are gone. I go to her closet. She has a walk-in closet. As a horticulturalist who is white and has cancer, her closet has a large glass jar filled with marijuana. The closet is also used as a drying place.

It is not the marijuana that interests me even though I have all the credentials: Loved one just passed, currently a senior at art school, grew up in Massachusetts . . .

I take her large red suitcase, empty now, and find all her favorite clothes: the Grey T-shirt from Target, the blue and white striped Madewell T-shirt, the blue taffeta pleated skirt, the light pink asymmetrical silk chiffon skirt, her cotton collarless blue “Chinese” shirt that she stole from her boyfriend, her reversible silk printed “Chinese” blouse, her grey skirt which she got off of Etsy which shipped from Bulgaria which she wore for her last birthday. I stick as much clothing that can fit in the suitcase.

There is a sewing tin- it was her mother’s and have used it numerous times since sewing is my profession. I’m not allowed to have this. Her boyfriend tells me “no.” I accept this as a contingency. He has her two dogs, her house, and 15 or so years with her. And he has the sewing tin.

In the coat closet, I take the millennial pink raincoat.

I return to school after a week of absence. I’m incapable of spelling my name correctly. I am aware of this during a midterm exam.

For a year I exclusively wear her clothes.

How can the clothes of someone you love exist without them?

It’s February again. I’m 25. I moved to Brooklyn at the top of the month. So far, I have biked across the Manhattan and Williamsburg bridge.

But today I am meeting a friend for Dim Sum in Lower Manhattan.

I’m wearing a dress from Target, it's cream-coloured, off-white. I am once again capable of spelling my name- and wearing clothes that are my own rather than my Aunt’s. But there’s something about going to a place that my Aunt has been that is incredibly comforting. And yes, there are thousands of Targets and millions of people go to Target, but it's also a store where my aunt loved to shop for clothes. To say that I miss her would be an understatement: I long for her. This is a dress from Target, which thousands of other people have, but to me, it is the closest thing to an embrace that I have from my Aunt.

I’m walking the Brooklyn Bridge- but this time, for the first time, I’m crossing over from the other side.

Anni Reffsin (she/her) currently lives in Brooklyn and can sew. She is a Peer Group Facilitator at The LOFT.  You can connect with Anni on Instagram, @Anni_Xing, or email, [email protected]. This is Anni's first contribution to OUTSpoken.