OUT at the Movies

OUT at the Movies schedules group outings to films of interest to the local LGBTQ+ community.
RSVP here: https://www.loftgaycenter.org/announcing_virtual_support_groups
For questions contact The LOFT's Helpline: (914) 948-2932 x13 or [email protected] 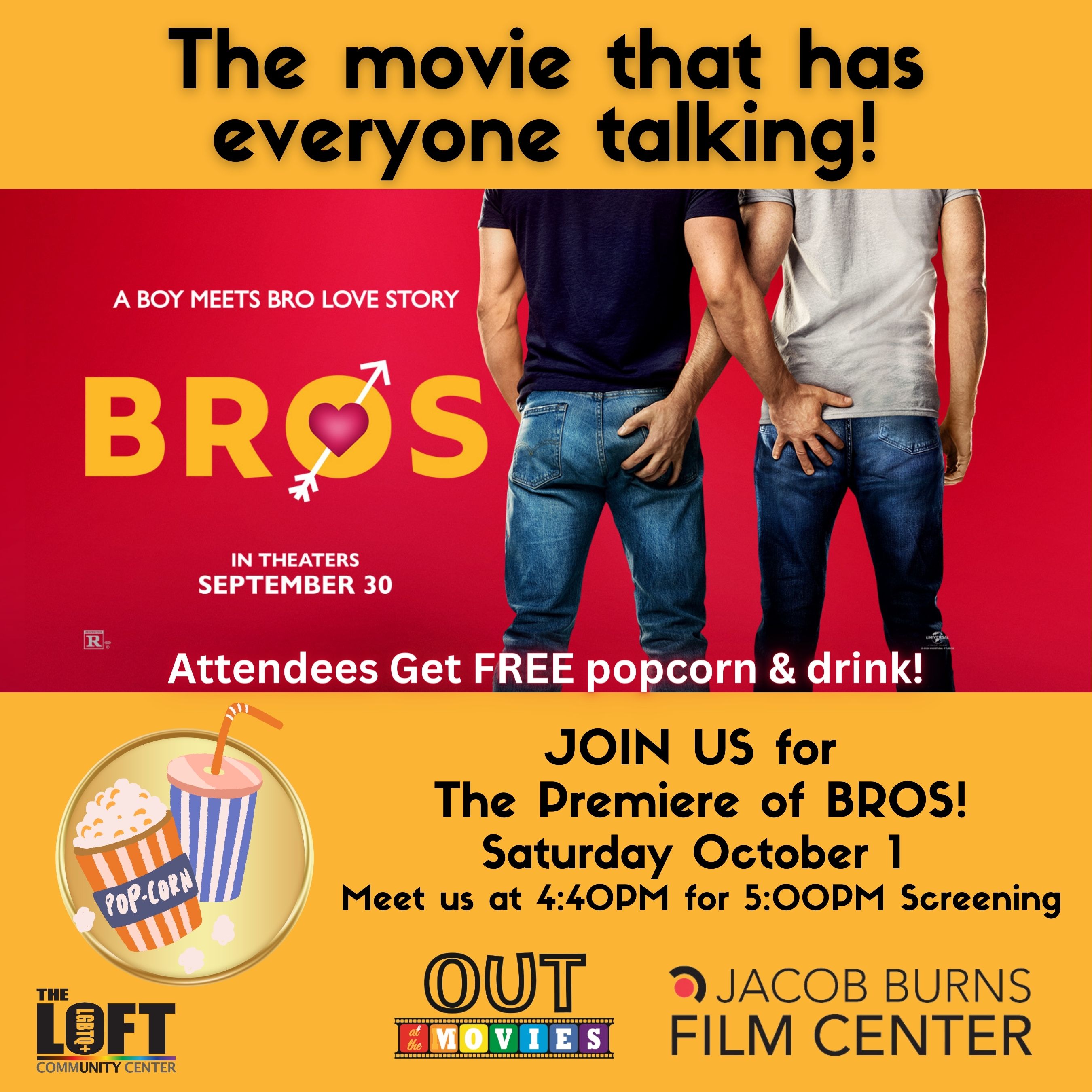 OUT at the Movies schedules group outings to films of interest to the local LGBTQ+ community.

All Out at The Movies Attendees who purchase a ticket will receive free popcorn and drink.

For more info on the film and to buy tickets click here,

From the ferocious comic mind of Billy Eichner (Billy on the Street, 2019’s The Lion King, Difficult People, Impeachment: American Crime Story) and the hitmaking brilliance of filmmakers Nicholas Stoller (the Neighbors films, Forgetting Sarah Marshall) and Judd Apatow (The King of Staten Island, Trainwreck, The Big Sick), comes Bros, a smart, swoony and heartfelt comedy about how hard it is to find another tolerable human being to go through life with.

Starring Billy Eichner, the first openly gay man to co-write and star in his own major studio film—and featuring an entirely LGBTQ+ principal cast, including Luke Macfarlane (Killjoys), Ts Madison (The Ts Madison Experience), Monica Raymund (Chicago Fire), Guillermo Díaz (Scandal), Guy Branum (The Other Two) and Amanda Bearse (Married …with Children)—Bros is directed by Nicholas Stoller from his screenplay with Eichner. The film is produced by Judd Apatow, Stoller and Joshua Church (co-producer Trainwreck, Step Brothers) and is executive produced by Eichner.

Use promo code BROMEETSBRO to get the JBFC member price on up to two (2) tickets per order to any regular screening of Bros, opening Sept. 29 at the JBFC. Just head to the film’s booking page on the JBFC website, click on your preferred date and showtime, enter promo code BROMEETSBRO in the promo code box at the top right of the screen, and click “submit” before selecting your ticket(s). Your member-priced ticket discount will be reflected on the checkout page, saving you $5 per ticket and up to $10 total off your order!

What's Better Than Watching Movies with Friends!? Come Join Us!

LOFT Social Groups are open groups which welcome everyone ages 18 and over. Groups are led by members of the LGBTQ+ and allied communities. There is no need to preregister and no fee to attend.

Donations are welcome. Suggested donation is $5; more if you can, less if you can't. Fees related to activities are the responsibility of participants.