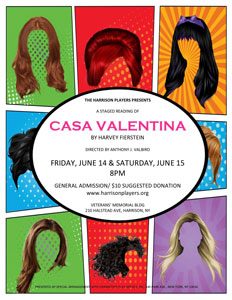 Join the Harrison Players for a staged reading of "CASA VALENTINA," a story of crossdressing and identity in the mid 20th-century.

"Casa Valentina is a small hotel in the resort area of the Catskill Mountains in New York. In the early 1960s, Casa Valentina has, as guests, heterosexual men who dress and act as women. They are faced with a decision whether to become an official organization."

Performances on June 14th and 15th at the Veterans' Memorial Building in Harrison, NY. Tickets are $10.