It Started With Kopay 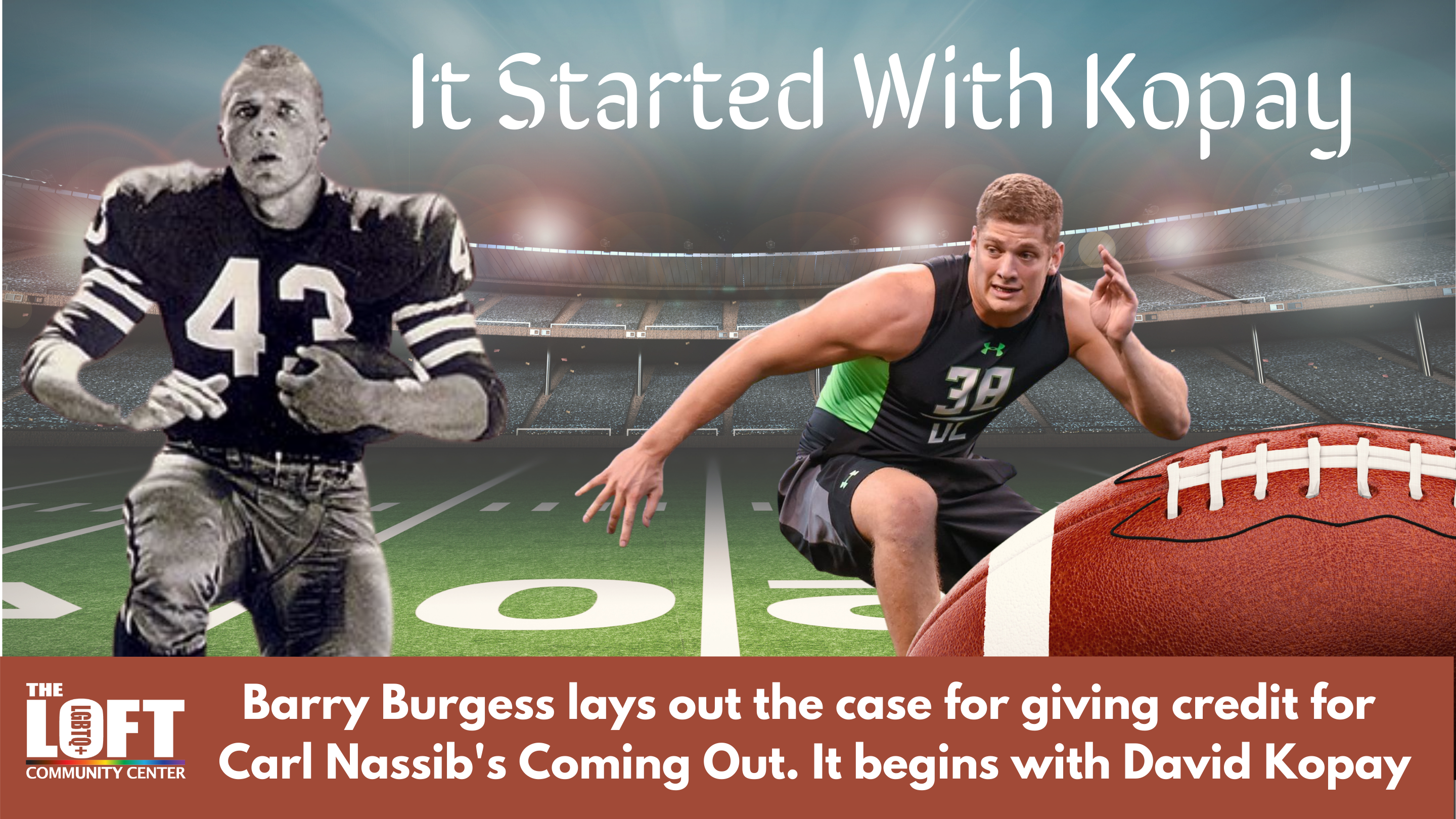 by Barry A. Burgess

Recently, Carl Nassib took a step forward for our community. He has my thanks. May his life be filled with blessings. But as a person who came out in 1972, I did what many men of my generation did. I thought back to 1975 when David Kopay came out. Men of my generation lived into adulthood in a world where no football player had ever come out. Not before David. Ever. Many of you did not. Billie Jean King said his book made an enormous impression on her. I can only speak for myself.

Now I am no football fan. To me, it represents everything Patriarchal that is wrong with this country. And because I am sarcastic, I view it as I view professional wrestling: an excuse for big testosterone-filled men to rub all over each other and then insist that they are straight. Ridiculous, isn’t it? But that is the line we gay men have to cross. So, with that wry thought, let’s get back to 1975 and David Kopay.

History is like genealogy. It grows geometrically. One person breaks a barrier and stands up for the community. By doing so they provide two shoulders for other people to climb upon. Then those two people provide four shoulders for people to stand on and it continues to grow and branch just like the structure of a family tree. But no matter how long and how far you grow that tree, no matter how many times the branches multiply, you can trace it all back to that one ancestor: That one person who stood up for the community FIRST.

In football, that person is David Kopay.

But this week, when I cheerfully mentioned David Kopay’s name, I got a nearly unanimous response, “Oh, him? He didn’t come out while he was still an active player.” Essentially a disclaimer of his firstness. Now there have been a lot of people who have come out of the football closet in these nearly fifty years since Kopay. Jerry Smith and Roy Simmons came out after they left football. Ray McDonald was outed to his coach. In fact, he was arrested for public intercourse, so frankly, there goes the theory that Nassib is the first active player. Everyone knew about McDonald, the coach just kept it quiet. There were many men who came out. Some in college ball. Some on non-major league teams. Each story different with some minor variations. Each one helping to open the closet door. But David was the one who unlocked it in the first place.

Why do we feel compelled to follow his name with a disclaimer? Because the power of major league football, the Patriarchy, and the media have taught us to. It is their argument to keep us forgetting and dismissing fifty years of them knowing and STILL ignoring us.

“He didn’t come out while he was still an active player”. What does that even mean? Kopay wasn’t queer enough at the right time?! He was just as queer when he was in the locker room with all the cis-gender straight men. But they think it is okay because they didn’t know until later. What?! This is specious equivocation. And we are repeating it.

What do I want to hear when I ask, “What about David Kopay?”

“Yup! It all began with him!” Not a disclaimer that sullies his firstness. Rather an affirmation that this was a fifty-year process that began with the brave move of one man. A man whose career was destroyed. David tried to make a comeback through coaching in the eighties. But no one wanted him in the locker room. It took until 1992 for another gay man to out himself to football. Seventeen years. That’s how terrified everyone was. David paid the price for us. We owe him a debt we can never repay. Because he, and those 26 men, paid the price in money, career, and dignity, Carl Nassib will never have to. So, I want to thank Carl for acknowledging Mr. Kopay’s sacrifice. Let’s all do the same, why don’t we?

As far as I am concerned, we have been sending gay cis-gender men into the locker rooms of professional football for fifty years. I am looking to the future. Let’s see the Patriarchy’s male egos handle big muscular handsome trans men in that locker room.

The LOFT Blog is a community-driven blog for our members.  Are you interested in writing an article?  Contact [email protected]