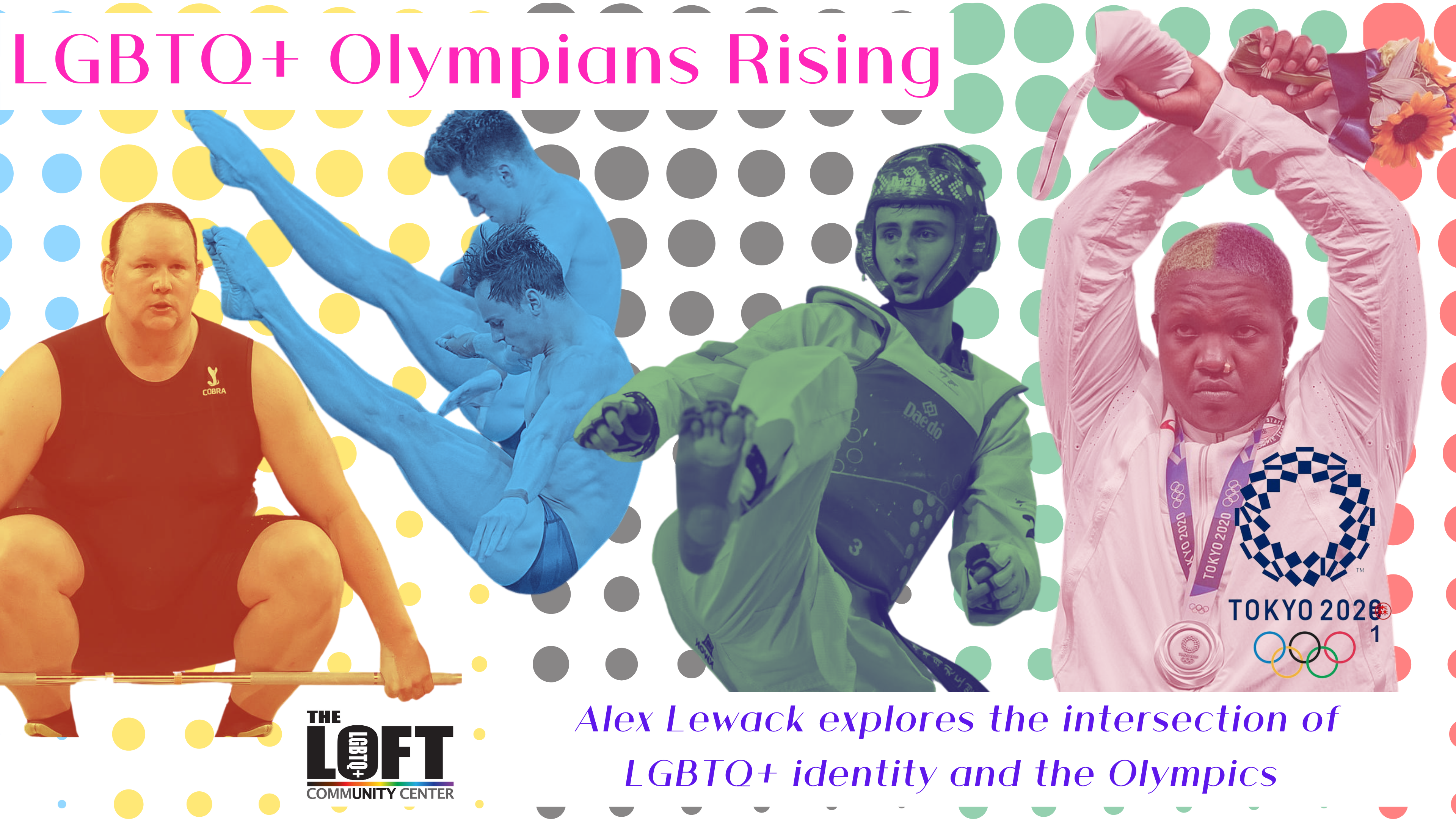 The Summer Olympics are queerer than ever! This year at the Olympics there are at least 182 out LGBTQ+ Athletes. The number of publicly out LGBTQ+ athletes competing in Tokyo is greater than the number of out athletes who have participated in all previous Summer and Winter Olympic Games. As we celebrate this milestone being achieved in Tokyo, we must acknowledge the very binary structure of sports and consider our non-binary athletes wishing to compete.  This increase in the number of athletes reflects on the growing acceptance of LGBTQ+ people in sports and society.

Laurel Hubbard made history with being the first openly out transgender individual to compete in an individual event at the Summer Olympics. Laurel Hubbard is a weightlifter from New Zealand. Unfortunately, Hubbard did not make it to the podium at this Olympics but she said she was humbled by all the support she’s received. Hubbard also said, “Thank you to the IOC for living up to the Olympic values and showing that sport is for all and that weightlifting can be done by all kinds of people.”

Raven Saunders is black, gay woman, and a mental health advocate. She also goes by the nickname “Hulk” and on the field, she had her hair purple and green, the Hulk’s colors. She won the silver medal in Women’s shot put. When Saunders stepped up to the podium to take pictures for her win, following the national anthem of the gold medal winner, she raised her arms and crossed them into an X shape. Saunders said she did this to represent “the intersection of where all people who are oppressed meet.” After competing, she said that she aimed to give light to “people all around the world who are fighting and don’t have the platform to speak for themselves.” She also gave a shout out to all of the black community and to all of the LGBTQ community and to all of the people dealing with mental health conditions.

Tom Daley won the gold medal for his diving. After receiving his medal, he sat at the press conference and proudly stated “I am proud to say I am a gay man and an Olympic Champion.” This statement was made more poignant when we are reminded that Daley sat between athletes from Russia and China, which are two of over 70 countries where homosexuality is still illegal.

Tom Daley has used his platform to say “I hope that any young LGBT person out there can see that no matter how alone you feel right now, you are not alone, you can achieve anything and there is a whole lot of your chosen family out here, ready to support you.” Daley has also become an Internet sensation with images and videos of him knitting at The Olympics. He knits for a brain-cancer charity in memory of his father. His father died of brain cancer in 2011, a year before Tom Daley’s debut at the London Games.

Jack Woolley has made history as the first Irish athlete to qualify for the Olympics in taekwondo. He is also the first out LGBTQ Irish Olympic athlete, coming out in a documentary as bisexual. However, labeling his sexuality isn’t important to Jack. Jack regrets coming out on television due to the fact that he had just come out to his parents. Also, his grandparents didn’t know at the time and had to be told.

Jack says he wants to be known as the first the first Irish Olympian in his sport, the lad from Tallaght who went to the Olympics, and not known as Jack the gay athlete. At the same time Jack hopes to be an inspiration to young people. We applaud Jack for speaking his truth.

While the number and amount of open LGBTQ+ athletes are greater than any other Olympics, we must also recognize that there are still so few LGBTQ+ Olympians. According to the list of athletes on the Olympic website, 11,656 athletes are participating in this year's Games.  Researchers who study LGBTQ+ inclusion in sport hypothesize that young LGBTQ+ people are still being discriminated against while playing sports. Because they are being discriminated, this may lead them to stop playing altogether, which narrows the pipeline to pro sports. There might also be LGBTQ+ athletes competing in the Olympics who don’t feel comfortable coming out, due to a culture within sports that still relies on stereotypes of gender and sexuality.

The Olympics haven’t always accepted LGBTQ+ athletes. Transgender participants were first allowed to compete at the Olympics in 2004 – but not until these 2020 Olympics in Tokyo, no trans athletes ever had. Sometimes the Games have taken place in countries where being LGBTQ+ is not widely accepted or where legislation impacts LGBTQ+ residents. The Olympics also has a way to go when it comes to the inclusion of athletes who are intersex and non-binary. In the years 1968 to 1998, the International Olympic Committee required athletes to undergo sex testing to “prevent masquerading males and women with ‘unfair, male-like’ physical advantage from competing in female-only events.” In the 2018 World Athletics, the international governing body for track and field and cross country running whose athletes compete in the Olympics, started requiring women with high testosterone levels to take medication to reduce their testosterone. Because of that requirement, it resulted in intersex athletes like Caster Semenya, a South African runner, former gold medalist and a queer woman to be banned from competing unless they took medication which Semenya refused – or being nudged to surgically alter themselves.

Here’s to hope for the future for more out LGBTQ+ athletes to compete in the Olympics and for more people to be accepting of these LGBTQ+ athletes. We congratulate those out and proud LGBTQ+ Olympians.  If the competition was visibility and being an inspiration for future generations they would all share the medals podium!

Resources for LGBTQ+ Inclusion in Sports:

Books and Films (available for purchase)