The Arc is Becoming A Circle; Push Back 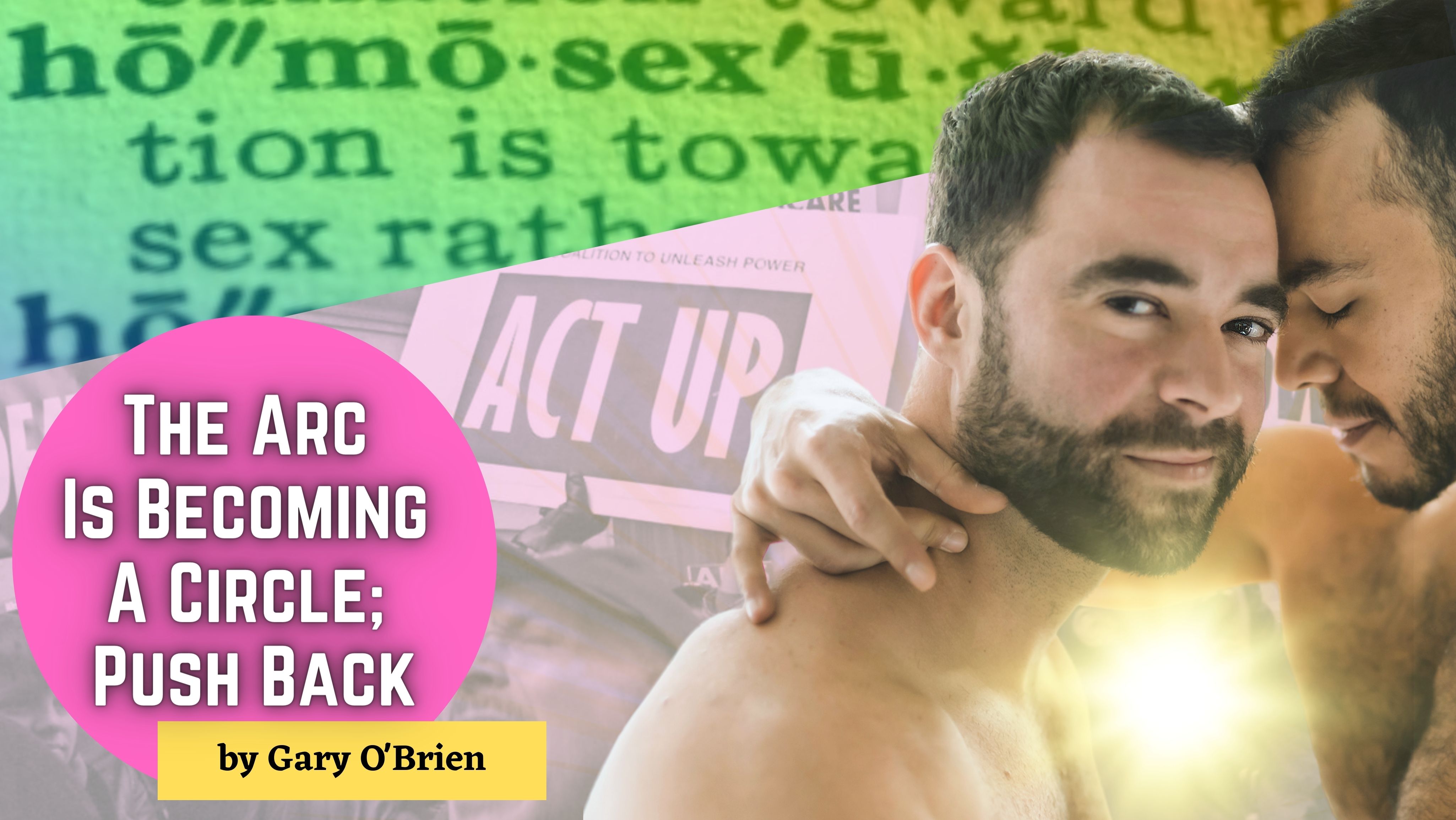 In 1968, Dr. Martin Luther King Jr. told us that “[W]e shall overcome because the arc of the moral universe is long but it bends toward justice.” Bending is a euphemism for the fight for freedom, justice, and equal rights for all.

I was born in 1963, which means my spiritual, social, righteous, and sexual awakening began in the 1970s. The 1970s was not a particularly good time to be gay in a conservative suburban town. I was a curious teenager. Curious in the sense that I had to know, I had to learn, I had to satisfy my inquisitive self.

Some teenagers go through a rebellious period where they push the limits of acceptability with authority figures and society. That was not me (well maybe a little). Instead, I needed to have knowledge, I needed to understand, I needed to have the words and concepts to the free-flowing monologue of my mind. I was a knowledge nerd because I had profound hearing loss in both ears, which meant I was not participating in typical teenage banter nor was I active in social circles. I relied on the library, books, and my ability to read and absorb information.

At about the age of 13, I snuck into the adult books section of the library. I minimized my presence at the end of a stack of books to read about human sexuality. In that stack of books, hidden from peering, judgmental authority figures, I was enlightened. The book that found its way into my sweaty hands described heterosexuality and homosexuality.

I immediately identified with the definition of homosexuality and felt such a powerful sense of relief and inner peace. I was joyful to know that there was a word for me and that I was discussed in an academic treatise in quite ordinary ways. Fortunately, the book I selected was not negative and described homosexuality as a regular part of the spectrum of human sexuality. Had I picked up a more conservative book my entire life may be quite different today. Thank you to that unknown author and thank you to the gay Gods that guided me to that book in the forbidden adult book section.

Understanding that there was nothing wrong with me was cathartic, emotionally liberating, and transformative, but I still felt incomplete. I still did not have complete closure; the circle in my mind was more of an arc bending toward closure, but not there yet. I still did not understand why most of what I encountered in society was sending the message that homosexuality (gay was not a term I heard much until the 1980s) was deviant, disgusting, abnormal, and an abomination. Hell, I only had a crush on a cute boy in my class and he did not know it. How can that be bad? My thoughts never left my head!

I spent the slow-moving period of 13-18 years old devising plans for how to live a seemingly heterosexual life while having a private gay life. I convinced myself I could make this work. By 16 years old my attraction to and desire for men was so strong that I knew I could not resist forever. It was only a question, in my young, undeveloped frontal lobe, as to how to pass.

I started college at 18 in a city far from home. On my very first day I met a guy that changed my life. He was an absolute dream; beautiful, spiritual, intelligent – I fell in love at first sight. He was my first true love; my everything for two years. Any and everything I thought about in high school was gone. I was gay, proud, and deeply in love. There is nothing I would not have done for him. This was 1982-1984 and my college campus bubble was bliss, but the world was not. To be gay and open was not okay. I experienced verbal abuse, physical abuse, and emotional abuse for being gay and the nascent HIV/AIDS epidemic was causing more backlash against the LGBTQI+ community.

The abuse took a toll on me emotionally. It took a toll on my love too. He dropped out of college and moved 1,500 miles away giving me my first heartbreak. I thought my life was over at that point. I did not believe I could ever love again the way I loved him. This traumatic event plunged me into a depression where I contemplated suicide and many other horrible thoughts. All that was going through my mind was that I lost my love, I cannot live a truly authentic life, and I no longer had the energy to pretend to be straight, so what kind of life could I expect?

After a dark and dismal year, I changed my school, home, environment, and friends. These changes alone did not lift my depression and despair, but they did provide the catalyst for what would become the new me. I met great out and proud people. They encouraged me to accept who I am, they expanded my world view, and showed me that there are a whole lot more happy gay people in the world than I ever realized. This wonderful group of friends also got me involved in activism. I participated in the March on Washington, Act Up, and other protests in New York City and elsewhere. I volunteered to work for the organizers of the gay pride parade in NYC. I became vocal.

I no longer accepted the societal message that I could not be out, free, proud, and gay. I was living my life for me and I could clearly see that millions of others were doing the same thing. All the out and proud visibility of the community was having a positive impact on the zeitgeist. The protests, counter-narrative, and positive energy of the LGBTQI+ community throughout the 1980s and 1990s significantly bent the arc of the moral universe toward justice for the LGBTQI+ community. Of course, as we know, LGBTQI+ people can now marry the one they love. We have legal protections greater than at any time in history. This progress, this bending of the arc of the moral universe did not happen by chance. It happened because our brave LGBTQI+ brethren fought, pushed, and willed the arc in the right direction.

Today, the arc is starting to look more like a circle as it is being bent even further by extremists that want to turn back our progress. The bending of the arc appears in the form of book bans, transgender bathroom laws, do not say gay legislation, a call from Justice Clarence Thomas for more cases challenging gay rights, and more. My friends, my brothers and sisters, my fellow Americans, we must not let the arc become a circle so that we end up where we started back in the 1950s! Please fight back in any non-violent way you can. Write, speak, attend marches, protests, rallies, be visible out and proud, donate to LGBTQI+ organizations. It all helps. We can only keep the arc of the moral universe bending toward justice for the LGBTQI+ community if we do it together. Your life and happiness may depend may upon it.