Larry Kramer: The Man Whose Voice Continues to Shape The LGBTQ Culture 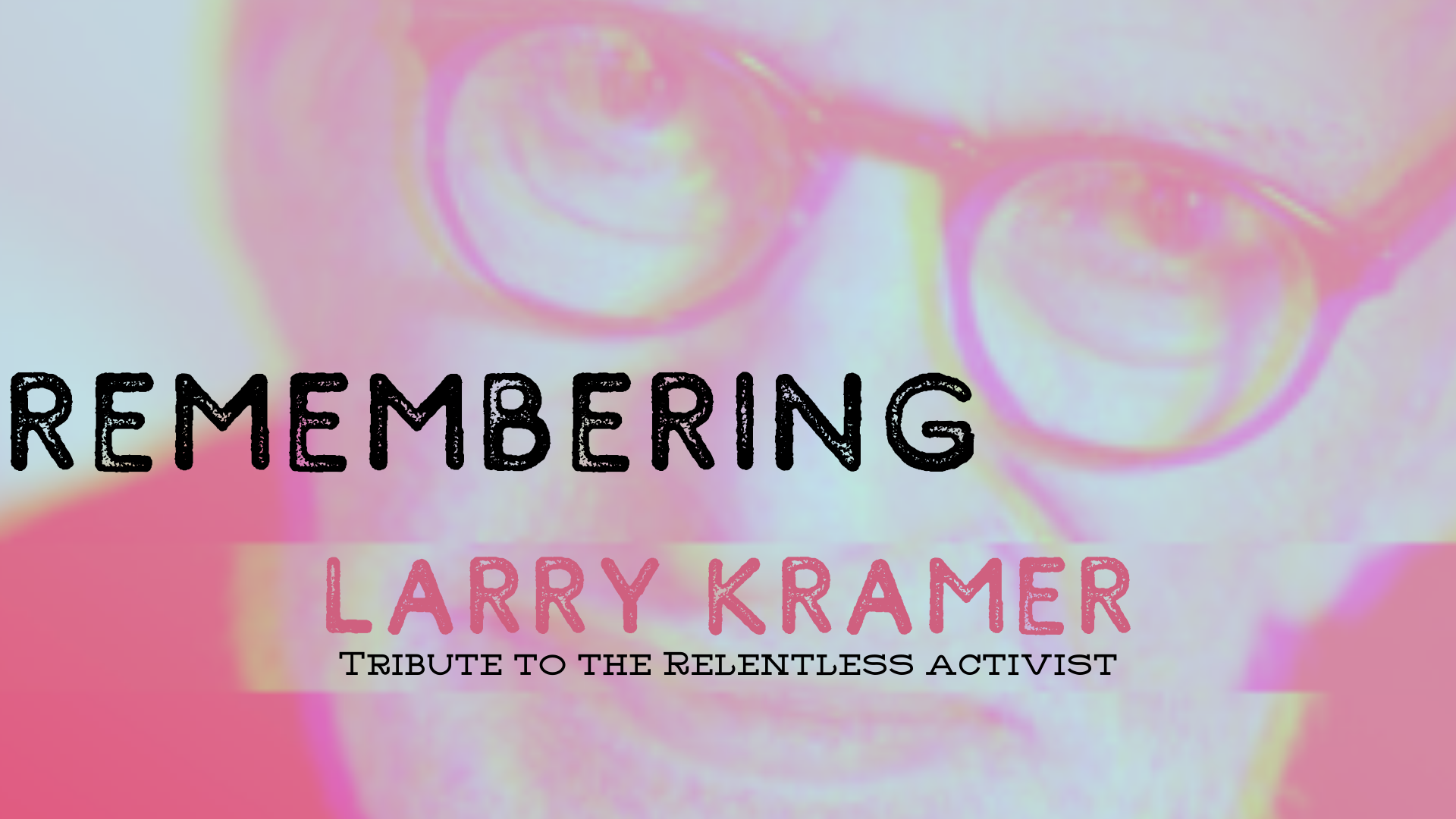 Personal Essay by Michael Sabatino and Robert Voorheis| May 31, 2020

Larry Kramer (June 25, 1935 – May 27, 2020) Larry Kramer, the Oscar-nominated screenwriter, playwright, author, and trailblazing gay rights and AIDS activist best known for the Tony Award-winning The Normal Heart, has died.  He was 84.

Larry was a feisty, determined, critical, fearless, and many times a confrontational individual. He kept good company and lived in the same apartment building as our dear friend Edie Windsor. This address also served as the home of Bella Abzug and Ed Koch in Greenwich Village.

He was a real inspiration to all of us activists; certainly, a role model for us as we became activists in the LGBTQIA community. To be an activist one must be relentless. Larry never gave up, always striving to reach his goal. 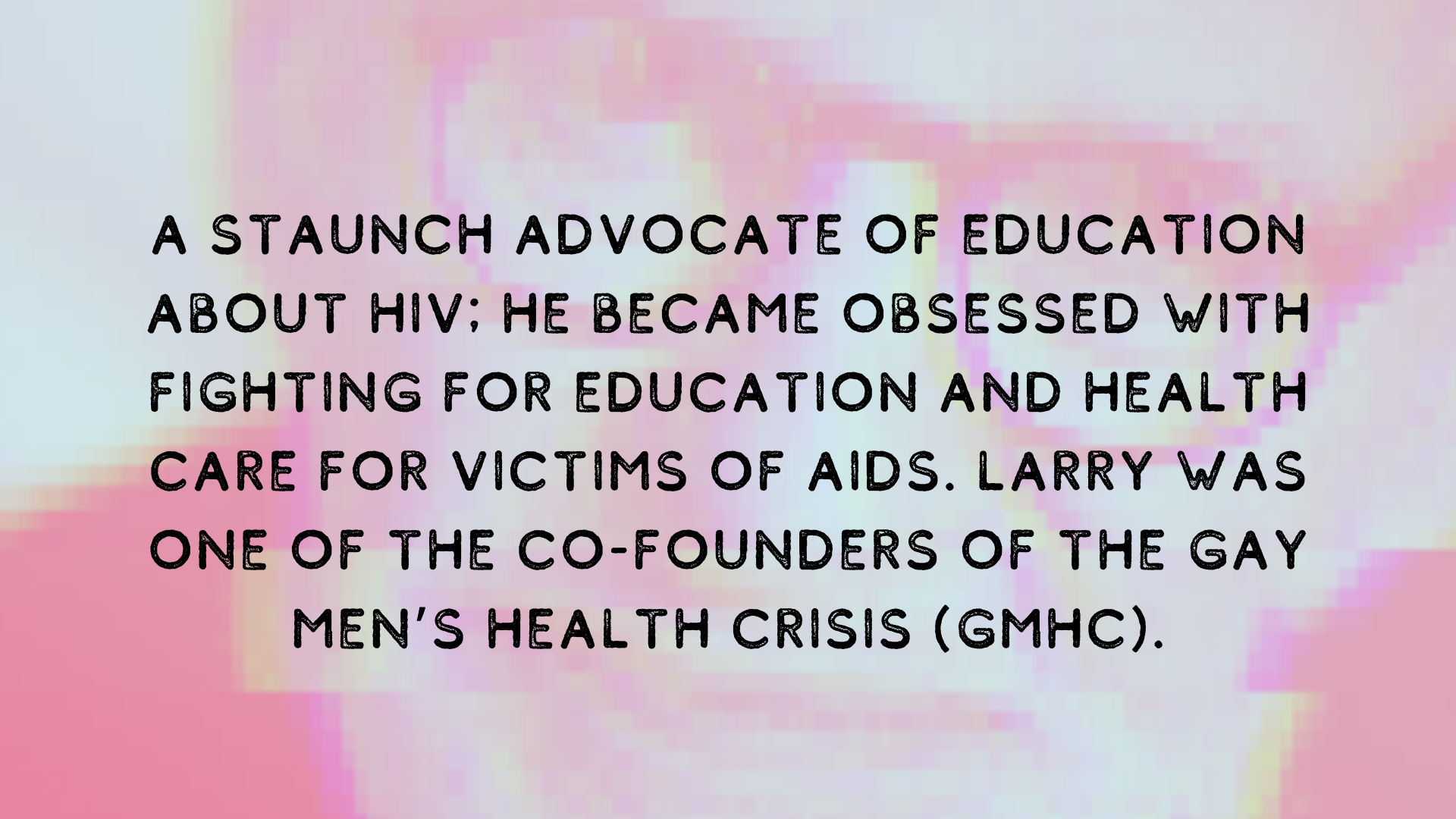 He grew frustrated with GMHC, he condemned the political apathy of GMHC. In turn, fellow members of GMHC objected to his extreme tactics and eventually ousted him.

His frustration with the apathy of gay men to the AIDS crisis and his break from GHMC lead him to form the AIDS Coalition to Unleash Power also known as ACT UP. ACT UP has been widely credited with changing public health policy and the perception of people living with AIDS while raising awareness of HIV and AIDS-related diseases. 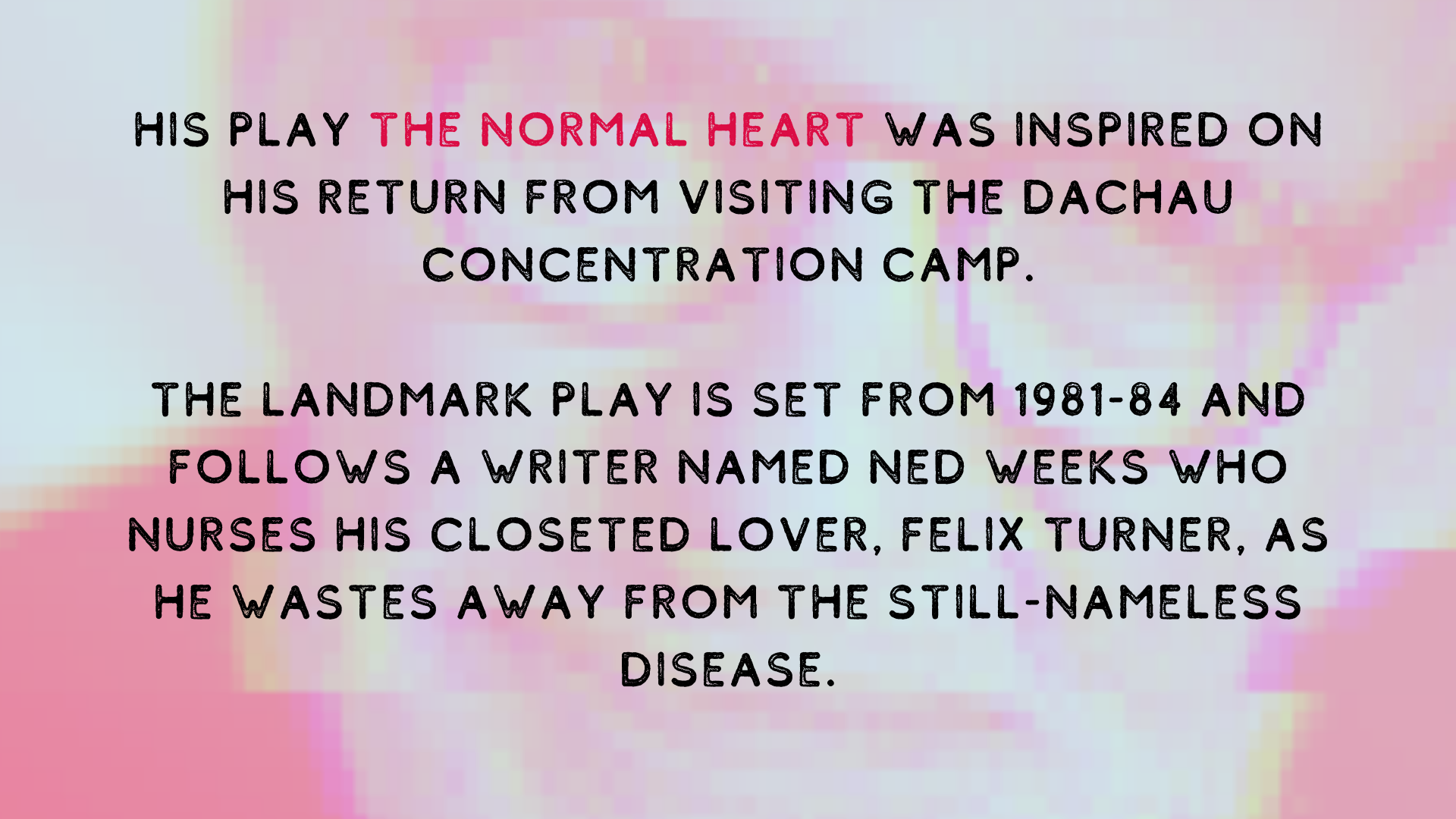 The play ran for a record 294 off-Broadway performances at the Public Theater. Kramer was a finalist for the Pulitzer Prize for his play The Destiny of Me (1992), and he was a two-time recipient of the Obie Award.

Kramer became a symbol for infected people who had new leases on life due to advances in medicine. "We shouldn't face a death sentence because of who we are or who we love", he said in an interview with The New York Times.

In May 2001, the Thomas E. Starzl Transplantation Institute at the University of Pittsburgh, which had performed more transplants for HIV positive patients than any other facility in the world, accepted Kramer on its list for a liver transplant due to damage from Hepatitis B. Kramer received a new liver on December 21, 2001. 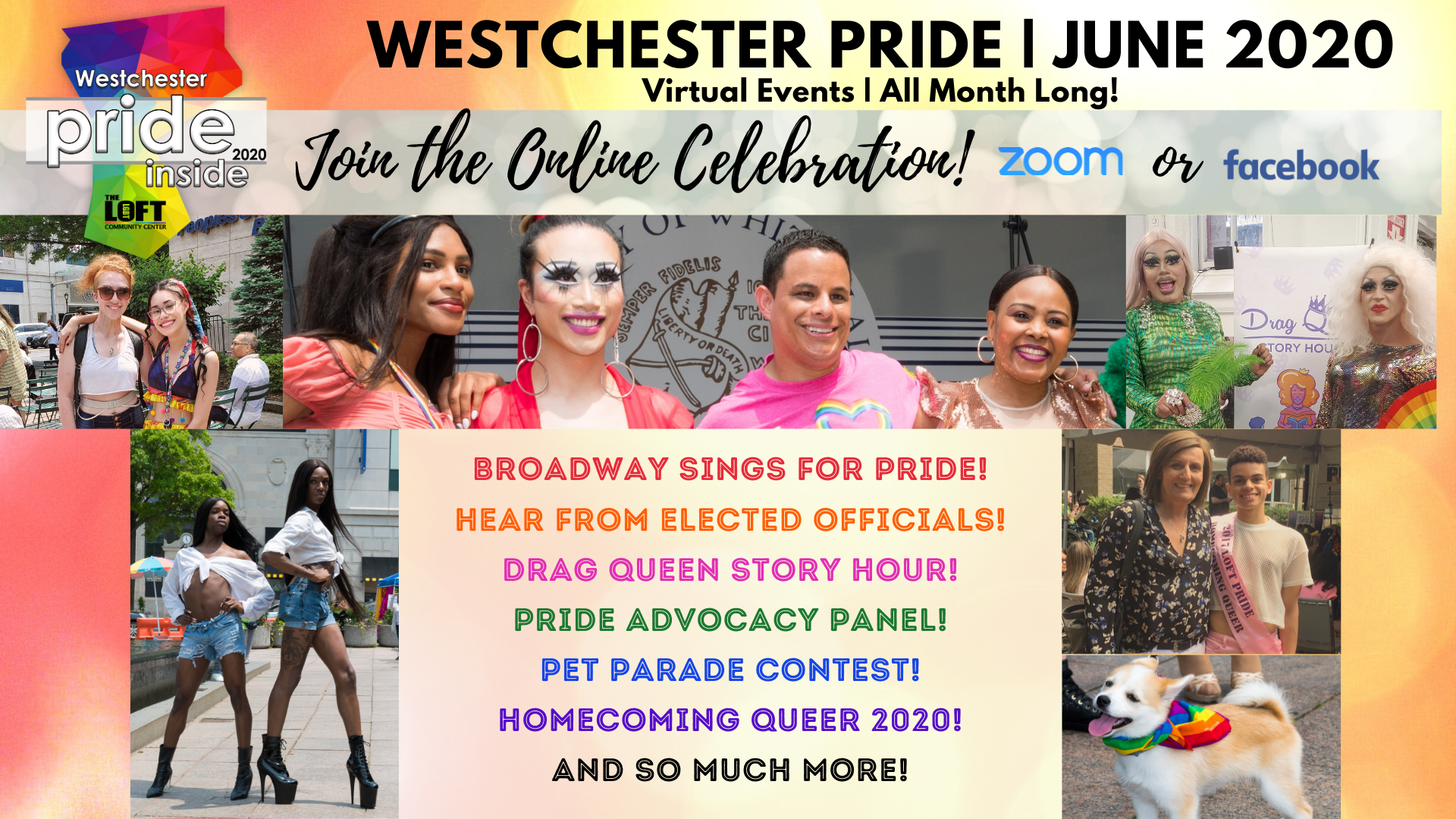 Kramer and his husband, architectural designer David Webster, had been together since 1991. It was Webster's ending of his relationship with Kramer in the 1970s that inspired Kramer to write Faggots (1978).

When asked about their reunion decades later, Webster replied, "He'd grown up, I'd grown up." On July 24, 2013, on the second anniversary of legal marriages in New York City, Kramer and Webster married in the intensive care unit of NYU Langone Medical Center where Kramer was gravely ill.

The last time we saw Larry was at the dedication of Edie Windsor’s Memorial Plaque, by the Historic Landmarks Preservation Center, which was placed on the façade of her 5th Avenue apartment building.

As irascible as ever, he commented on the fact that Ed Koch’s plaque was at least on the opposite side of where Edie’s was placed. It was well known that Larry was very critical of Koch’s apathy towards AIDS patients. He wants his plaque placed on Edie’s side of the building entrance. 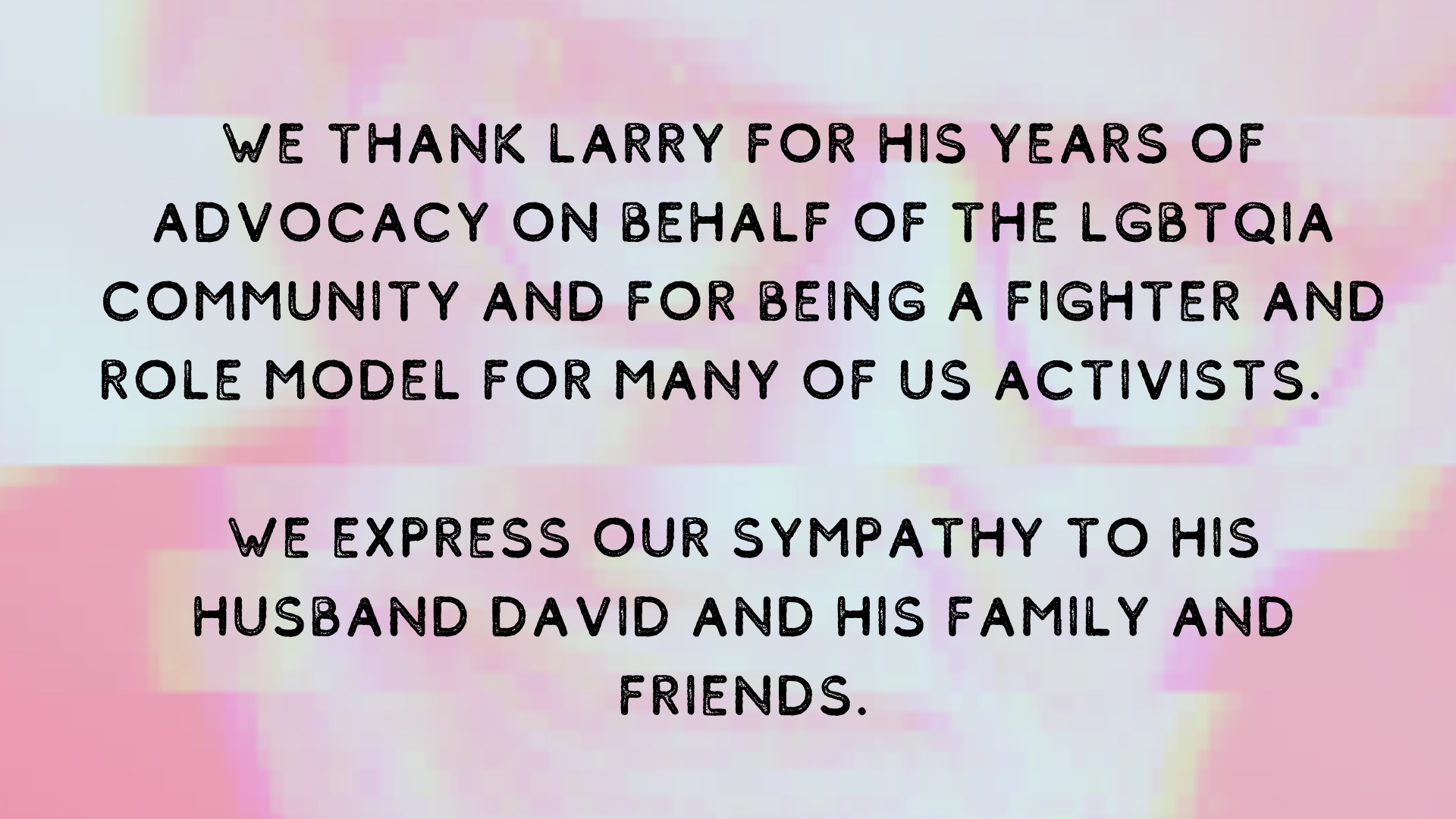 The LOFT would like to extend a thank you to both Messrs Sabatino and Voorheis, supporters of The LOFT, and prominent LGBTQ activists.  If you would like to learn more about the body of work by Larry Kramer, The LOFT Library is a lending library with over 5,000 LGBT-related books, films, and reference materials. To learn more, visit our site.