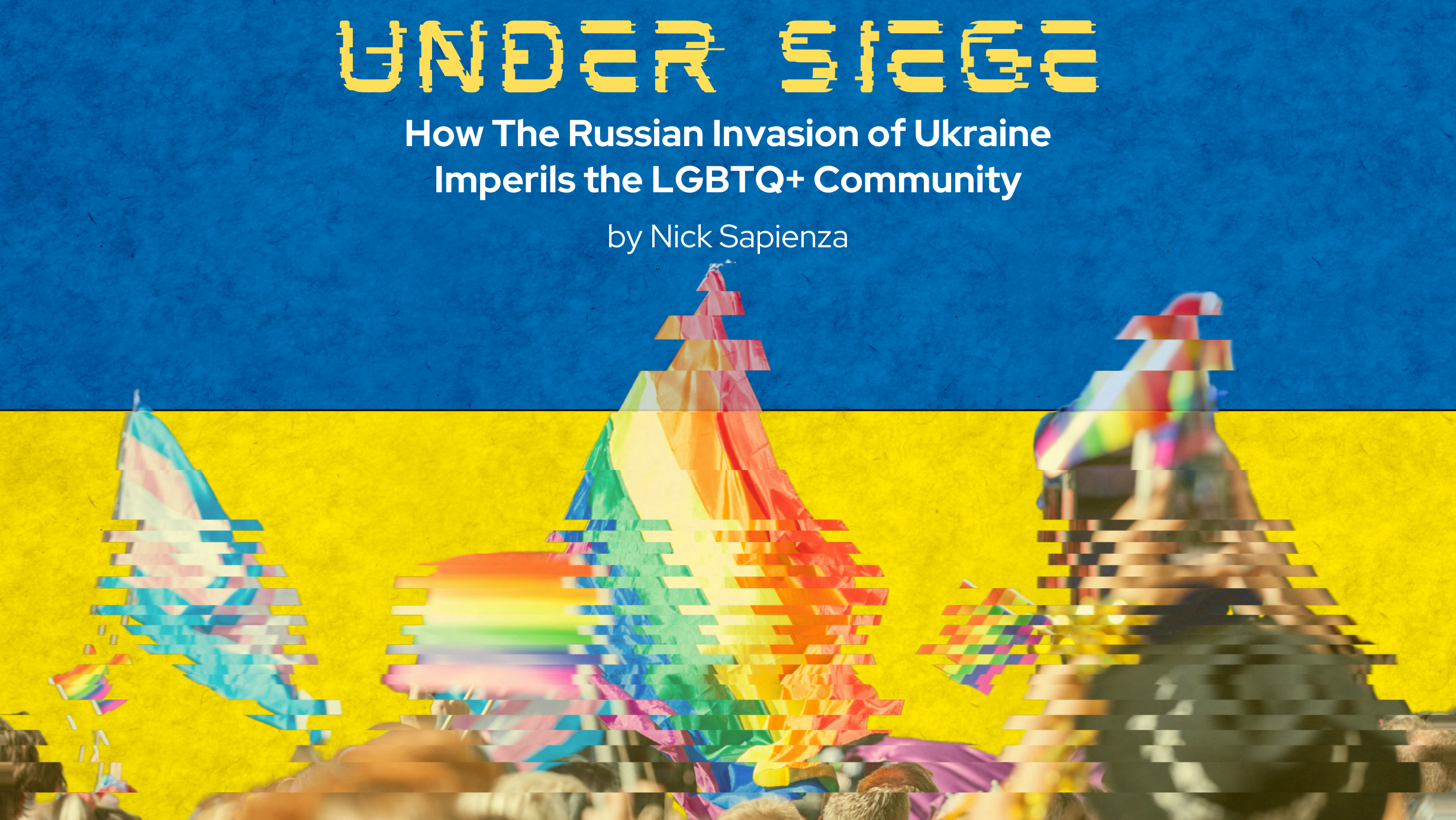 Trigger Warning: Descriptions of violence and torture are included in this article which may be disturbing to some readers.

In Russia, it’s no secret that the gay community is often the target of harassment. Now imagine what would happen if Putin succeeds in conquering Ukraine. Like the rest of Europe, Ukraine has a history spanning ten years of celebrating pride marches, embracing the LGBTQ+ culture, and strong beliefs in feminism. For the most part, Russia is the complete opposite of that, with the one similarity being that both countries do not allow same-sex marriage.

As a whole, LGBTQ+ Ukrainians fear that a victory for Putin will increase sanctions and cause further degradation of human rights for queer people, people of color, and the disabled. Furthermore, The economy will take a hit as Europe tries to save face, and the United States will scramble to make up for slow business transactions.

Since 2017, the persecution of gay men in Russia has become well known in the media. Straight men or homophobic police officers often make fake dating accounts to lure gay or bisexual men out on dates, only to beat them up or humiliate them. This anti-gay purge began in the Spring of 2017 and five years later remains strong.

In 2017, Chechnya opened concentration camps enforcing intense amounts of conversion therapy. One survivor, Amin Dzhabrailov, was kidnapped and taken away to a concentration camp. He had “wires attached to his fingers and put water on his body to help the current travel more effectively. "It was so painful; you’re just screaming, that’s all you could do,’ he says.”

With efforts utilizing shock therapy, waterboarding, psychological battery, and exposure of other gay men to capture and detain them, all the torture and intimidation was an aggressive effort to make Dzhabrailov disclose the names of other gay men he knew. Dzhabrailov goes on to say, “he was held for two weeks, cycling from the room where detainees were kept — and where he slept using a half-full plastic bottle as a pillow — to the room where he was beaten. There was torture ‘almost’ every day.”

Most people who are queer in Russia end up fleeing to a different country to avoid such a fate. Namely, Ukraine, where although same-sex marriage isn’t legalized, Russians can escape to Ukraine and still have the comfort of being within a Slavic country while being true to themselves. All of that will be ripped away should the Russian invasion succeed. Thus, if Putin is willing to allow the internment camps of gay men and women, who’s to say he won’t open internment camps for POC? The disabled? Women? Non-Christian Religions? The possibility remains as long as the invasion continues.

Any man between 18 to 60 must stay and fight off Russian forces, which unfortunately leaves many trans and nonbinary people in Ukraine stranded within the country. Ukraine has over 40 million residents within its borders, with women and children making up about 1 million people who have fled the country. Ukrainians already have a hard time changing their gender within their country, with many stating that the process is long and complicated.

If trans people are lucky enough to escape the country successfully, they are mocked and degraded at the borderlines where they seek asylum.“Robert, who asked not to give his full name, said the Slovak border control police mocked him, laughed and shouted at him for being trans and twice threw away his identity documents.” Although Robert was let past the Slovak border, he was still ridiculed for his identity crossing into Slovakia.

Human rights and security are under attack as Putin’s forces invade Ukraine. As we speak, students of the African Diaspora are trying to flee to Poland for shelter amid the Russian invasion. At this time, we must ask ourselves; how far will Ukraine’s forces push the envelope for only heterosexual, White-Ukrainians to prioritize relocating during this time? We can only extend so much sympathy until Ukraine leaves marginalized groups behind.

A student from Zimbabwe, living in the United Kingdom, Korrine Sky, said, “trying to leave Ukraine is like ‘Squid Games’ with Ukrainians and Europeans at the top of the hierarchy, people from India and the Middle East in the middle, and Africans at the bottom.” Reports from Ukraine have even stated that animals have been allowed onto transportation in favor of Africans. The bottom line is that even amid a catastrophic war, there was time for racism to play into survival efforts when people were trying to seek sanctuary.

People seem to forget that war in itself is a domino effect. With each missile fired, each property destroyed, and each Ukrainian forced to take shelter or flee the country, Putin will continue to hemorrhage business, global opportunities, and support from all other countries. Russia already has a reputation for being unsafe for queer people and people of color.

The whole world fears the worst, as a kremlin-ruled Ukraine would change everything for Europe. With Russia already gaining allies in Syria and Libya, the division will increase in Europe as long as the US chooses to remain on the sidelines. “The European Union and the United States are each other’s largest trade and investment partners, with trade in goods and services totaling $1.1 trillion in 2019”. Overall, the US and Europe have a mutual benefit, whereas peace within Europe shapes how business translates on a larger scale in the US.

Several comparisons have been made between Vladimir Putin and Adolf Hitler, explicitly citing how World War II began with Hitler’s forces invading Poland on September 1st, 1939. Jewish people were forced to wear stars in German-occupied Poland to identify themselves. Gay men and women were forced to wear pink triangles for the same reasons. Even people with disabilities, ranging from mental disorders to alcoholism, were persecuted and killed under a law that Hitler quietly put in place called “Operation T4”. Operation T4 allowed for a medically administered program of “Mercy Death” that led to the killing of 70,000 disabled Austrian and German people between 1940 and 1941. Today, Putin has done nothing to stop the Chechnya concentration camps, meaning he would allow similar atrocities to continue while his empire continues its expansion and conquest.

As more and more refugees flee the country, millions of disabled Ukrainians are abandoned at shelters. Mutual aid workers cite that any information for charities attempting to help Ukrainians with disabilities has been a “frightening … black hole” of information regarding these groups. Healthcare workers and resident providers have escaped the country, resulting in all children and adults with disabilities being abandoned within their residential homes and healthcare facilities, making it incredibly difficult for any transportation to be provided for people with disabilities to have even a shred of hope for escaping the bombing.

Ultimately, Putin’s invasion will not only encourage the persecution of LGBTQ+ in Eastern Europe; it will normalize homophobia and criminalize diversity for Eastern European countries as a whole. Russia had outlawed the acceptance of the LGBTQ+ community since 2013 when Putin banned “gay propaganda” and made it illegal to “distribute material in support of LGBT rights and to equate straight relationships with gay ones."

Despite all the hate and inevitable violence that this war will bring to the world, there are ways to help Ukraine and all marginalized parties at risk. It’s hard not to see what is happening as a losing a battle, but men continue to take up arms, and even women are staying behind to fight alongside the men. I think we can all learn leadership from Volodymyr Zelenskyy, who is staying to fight for his country and inspiring many to do the same. Even if the odds are stacked against him, he’s staying with his country and not backing down.

While this war continues, multiple marginalized parties are at risk during this time. Whether you’re gay, a person of color, trans, a woman, a child, or even disabled. Violence does not discriminate, but change is possible with enough rallying and sharing of resources. Even as the EU fund the war effort for Ukraine and has global support from the rest of the world, there’s always more that can be done. The world can strip Putin of everything, and he still won’t relent. Any social change requires unity and coming together.