An Absence of Rights 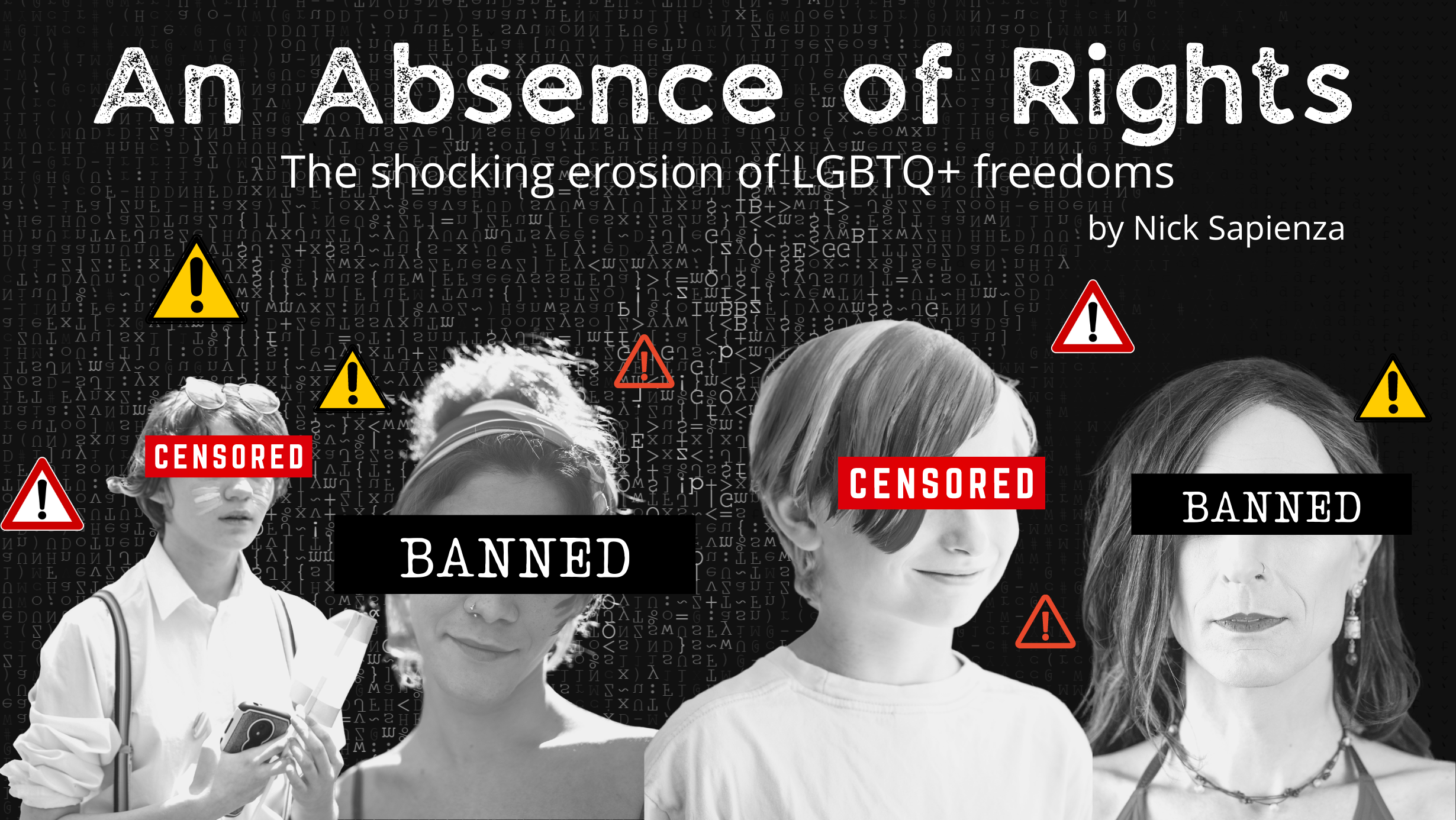 Being trans is not a new concept or something that people should be afraid to embrace. In our liberal bubble of New York, being trans has been celebrated within the club scenes, ballroom culture, and even our media consumption through shows such as Pose or Steven Universe. Gender is fluid, and identities are subject to change as we grow and develop into the people we long to become.

All of that being said, red states are now challenging that with new laws being passed to hinder the acceptance of queer identities by forcing parents, teachers, and doctors to out their children for the government to know and do what they please. Some laws ban the education of queer history, while others re-brand the acceptance of trans children as child abuse. Overall, conservative lawmakers make it increasingly dangerous to be trans in America. For trans people to exist, grow up, be acknowledged in the literature, or even participate in sports.

Two months ago, Texas Law Makers criminalized the act of gender-affirming surgery, which allows people to undergo a procedure that grants them the body that matches their gender identity. Gov. Greg Abbott issued a law that requires all teachers and doctors to report parents who have allowed their children to receive gender-affirming health care.

This bill radicalizes the idea that children have a right to do what they will with their bodies at an early age. What is harmful to their development is the notion that transitioning is not something normal and a part of life. Gov. Abbot ensured that trans people would be unable to embrace their identities until they are above eighteen. Until then, parents could be separated from their children on the grounds of accepting who they are. More so, it’s putting doctors and teachers in the role of mandated reporting whether they believe in this bill or not. Overall, this bill will destroy trust in the state of Texas for trans children and the professionals in charge.

Following this pattern of targeted xenophobia, Florida Gov. Ron DeSantis signed what is known as the “Don’t Say Gay” bill into effect last Sunday to all of our sadness and frustration. The statement claims to prohibit discussing sexual identity and queerness for children in classrooms ranging from kindergarten to third grade. Although it’s impossible to tell if that conversation would come up for such ages, it completely erases the idea that children can learn what it means to identify outside of the heterosexual binary. What makes this bill so dangerous is the stigmatization of LGBTQ+ history and sexual health. Parents and lawmakers are so concerned that if their children learn what it means to be queer or aware of sexual identity, it will turn them gay or lesbian.

While the obvious question is, who cares? The real damage involves forcing children to have a six-week time limit to come out to their school if they feel they are not straight. To many of us, coming out is a coming-of-age moment that happens the same as asking someone to prom or walking to school by yourself for the first time. A pivotal moment in our development, something that robs you of your agency and emotional growth when forced.

Children shouldn’t have to feel compelled to explain themselves at such an early moment. Some children might experiment and realize down the line that they’re not even queer. And that’s fine! The “Don’t Say Gay” bill criminalizes the act of experimenting and forces children into a heterosexual binary. A binary that limits expression in sexuality and gender and one that denies the history behind queerness.

Despite our shared horror of these bills’ approvals, anti-LGBTQ+ legislation has risen within the last five years. In 2018, about 41 bills were passed in the United States that attacked the rights of LGBTQ+ Americans. Whereas, in 2022 so far, there were over 238 bills proposed by lawmakers, with the majority of those bills attacking the rights of trans people. Ryan Thoreson, a researcher at Human Rights Watch, offers some explanation stating, “unfortunately, many lawmakers see transgender rights as a way of scoring political points.

There’s been a disturbing resurgence of old, inaccurate stereotypes that paint LGBTQ+ people as threats to children or as predators, fueling efforts to silence discussion of LGBTQ+ issues, cut LGBTQ+ kids off from information and support, and make life difficult for young LGBTQ+ people.”

Thoreson also points out that the Biden Administration’s acceptance of the LGBTQ+ community has a domino effect, meaning that conservative lawmakers who oppose the acceptance of trans communities will result in gaining favor from Biden’s opponents, meaning that GOP Senators are scapegoating trans people as a way to appeal to conservative senators and Christian-based organizations. With their support, the republican party will get away with practically whatever laws they want to pass—evolving from attacking queer people to eventually persecuting the rights of working-class citizens, women, and people of color. No one will be safe.

In addition to the attack on trans rights within politics, there’s an additional attack on literature within America. On February 7th, 2022, the New York Times published an OP-ED article citing the banning of Maus by Art Spiegelman in Tennessee. Since then, a flurry of book bannings has taken place to shelter children from “sexually explicit” material. Which, you guessed it, includes the prohibition of works by LGBTQ+ authors that bared their bones just for the youth to not feel alone in the world.

Notable titles included Genderqueer by Maia Kobabe and All Boys aren’t Blue by George M. Johnson. Both authors explicitly retell the experience of discovering themselves in a world where gender and sexuality were not as fluid as they are now. Red states seem to be banning these books to fit a Christian agenda and one that makes it easier to deny the existence of queer and trans individuals. Prof. Mayo-Adam says, “because many within the GOP believe that anti-trans policy will mobilize their base in the 2022 midterm election, much as anti-same-sex marriage ballot initiatives did in 2004”.

An attack on trans rights will gain traction from red states, coupled with banning books related to gender and expression, which will ultimately give GOP lawmakers an edge in upcoming elections from Christian organizations and homophobic parents that lack information on what it means not to be cis-gendered or heterosexual.

With the trans right to healthcare and control of their written narrative already under attack by red states and government, you think that would be the end, right? Wrong. Lia Thomas, a swimmer on the UPenn team, touched the wall in 4 minutes, 33.24 seconds in the 500-yard freestyle in the Division I Women’s Swimming and Diving Championship. She won one event and didn’t break any records, placing in the top eight of competitors. The controversy? She’s trans.

The crowd was roaring for every other competitor but met Thomas with uncomfortable silence. Even without a medal around her neck, Thomas’s mere presence was enough to stir up conversation in sports due to this question of fairness. “Athletes come to their sports with a variety of talent, body sizes, physical advantages or disadvantages, genetic makeup, and mental drive. Many cisgender girls, for example, are extremely tall or have exceptional muscle mass, traits that could give them an edge in multiple sports. But, correctly, we do not exclude those girls from school sports.”

Perpetuating this idea of “fairness” and withholding trans people from competing in sports alongside cis-gendered people is discriminatory and harmful. Such actions will lead to more unnecessary policing of trans rights, which will lead to the excessive policing of women’s bodies and health.

There have already been several women of color who have been banned from competing in the Olympics for having “too much testosterone” in their systems. Instead of competing in the designated sports that women have spent most of their lives training for, they have to argue and fight to prove their womanhood to a sexist system.

From several views, trans people have been discriminated against from a legislative, creative, and competitive standpoint. With the agency in their bodies, their writing, and their ability to compete in sports were challenged within the first three months of 2022.

It’s a nebulous playing field as there are so many misconceptions when it involves being trans that red states continue to play up for political advancement. Joanna Wuest, assistant professor at Mount Holyoke College, explains, “I caution against seeing this as a culture war issue, like, clearly it involves culture. But there are reasons why these big-money groups are funding these things. Sometimes, you can attack the regulatory state and trans issues all at once.”

When you have laws in place that control transitioning or the ability to compete in sports competitions, it’s an attack on more than trans rights. It attacks federal bureaucracy and workers’ rights, as not every doctor and teacher wants to report gay or trans children for simply being themselves. If lawmakers are allowed to discriminate against trans people so quickly, who knows what laws they’ll pass next to strip workers of certain rights? The court becomes more open as they narrow down the food chain. If trans rights become restricted, no one is safe from conservative partisans.