Honoring Those We Lost in 9/11 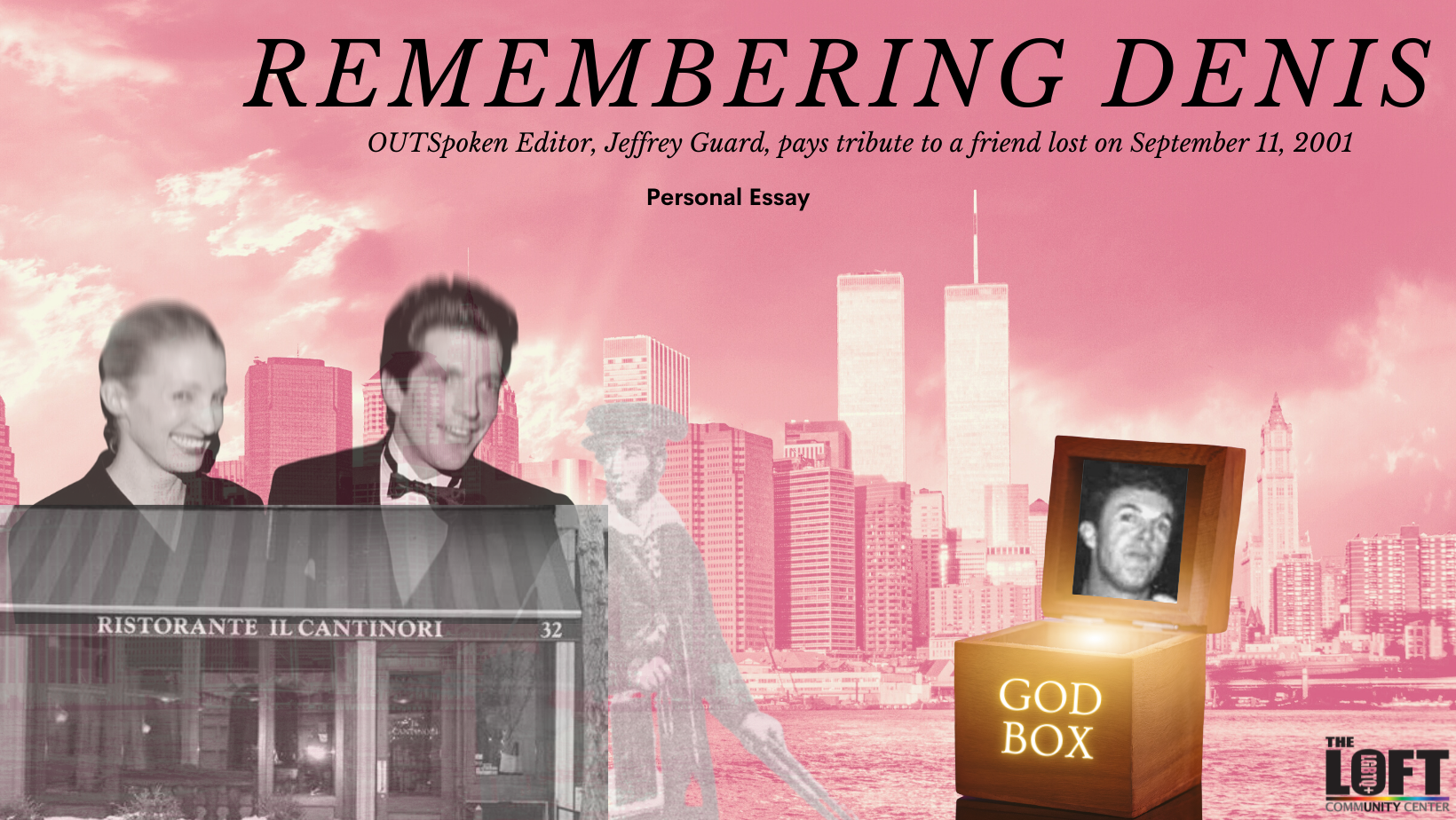 I had only been living in New York City for about a year. I was a fresh college graduate, lonely, broke, and desperate to connect with anything that was even remotely GAY.

I had a friend who looked like a lesbian version of Princess Diana. I kid you not. She was also supremely charming and funny—and as you might imagine quite popular.

“I’m setting you up,” she told me casually over the phone, “He’s in finance and a really nice guy. His name is Denis. You’ll like him,” she said, “Oh, he’ll be calling you at work, early in the morning.”

True enough, the next day my office line rang up at 9:00 AM on the dot. I remember he had a much deeper voice on the phone than he did in real life. He was also quick and to the point. He worked on Wall Street and had to be at his desk trading in a hot minute.

He asked me if I wanted to go out with him to dinner. Yes, that would be great I said.

“Would Il Cantinori be fine?” he asked. Being young and having no money I wasn’t about to complain about a free meal. I told him that too would also be great. Then the conversation ended, just like that, and I remember feeling like a monosyllabic idiot: "Yes", "Great." 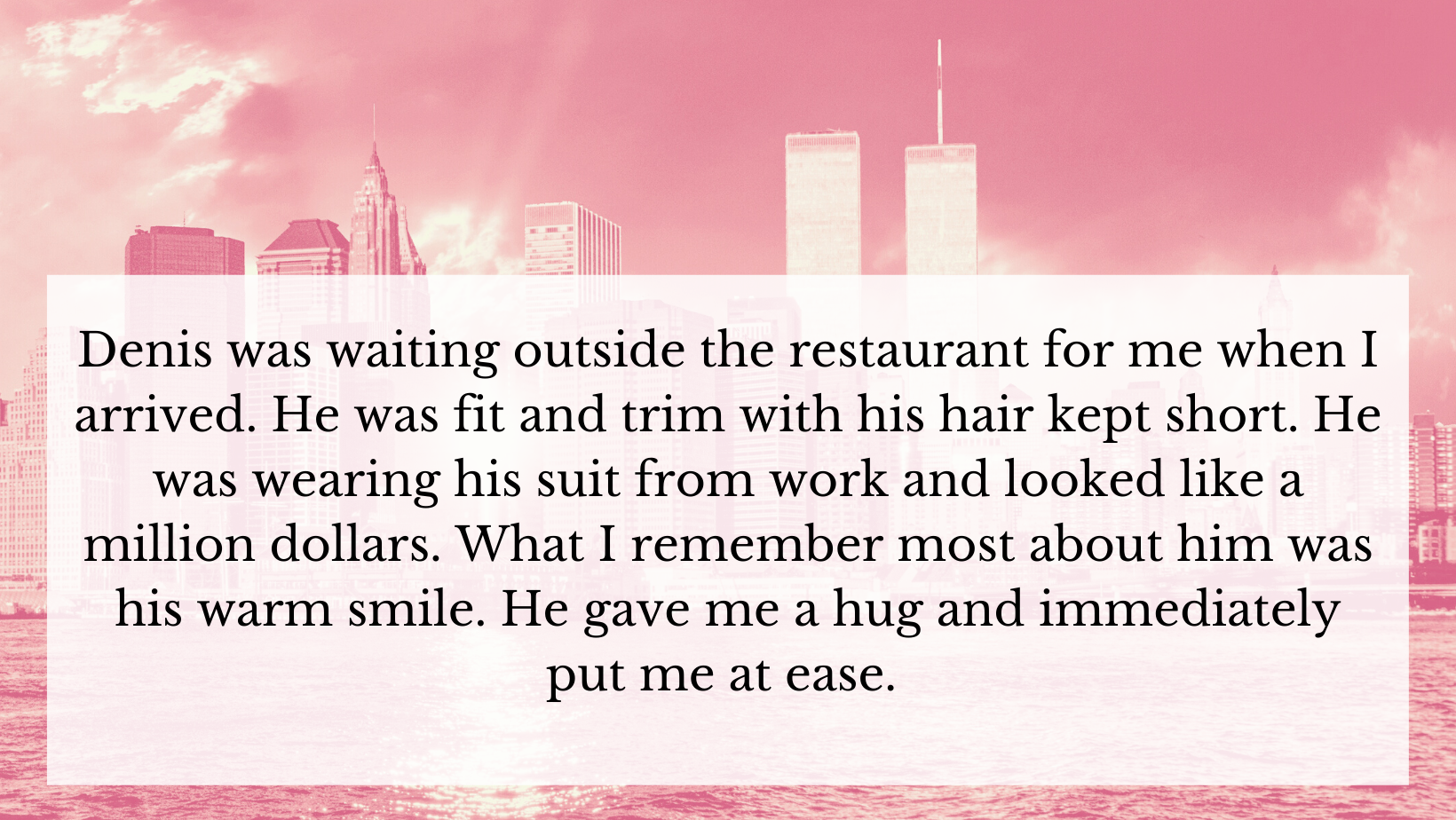 I had no idea Il Cantinori was Il Cantinori. I was kind of lucky in that way because had I known it was such an exclusive hot spot in the Village I probably would have backed out. The anxiety would have been too much.

Denis was waiting outside the restaurant for me when I arrived. He was fit and trim with his hair kept short. He was wearing his suit from work and looked like a million dollars. What I remember most about him was his warm smile. He gave me a hug and immediately put me at ease. He told me how excited he was to meet me and asked how I was doing. His effortless confidence and kindness won me over in that moment. It was clear that we were going to have a good time getting to know one another. 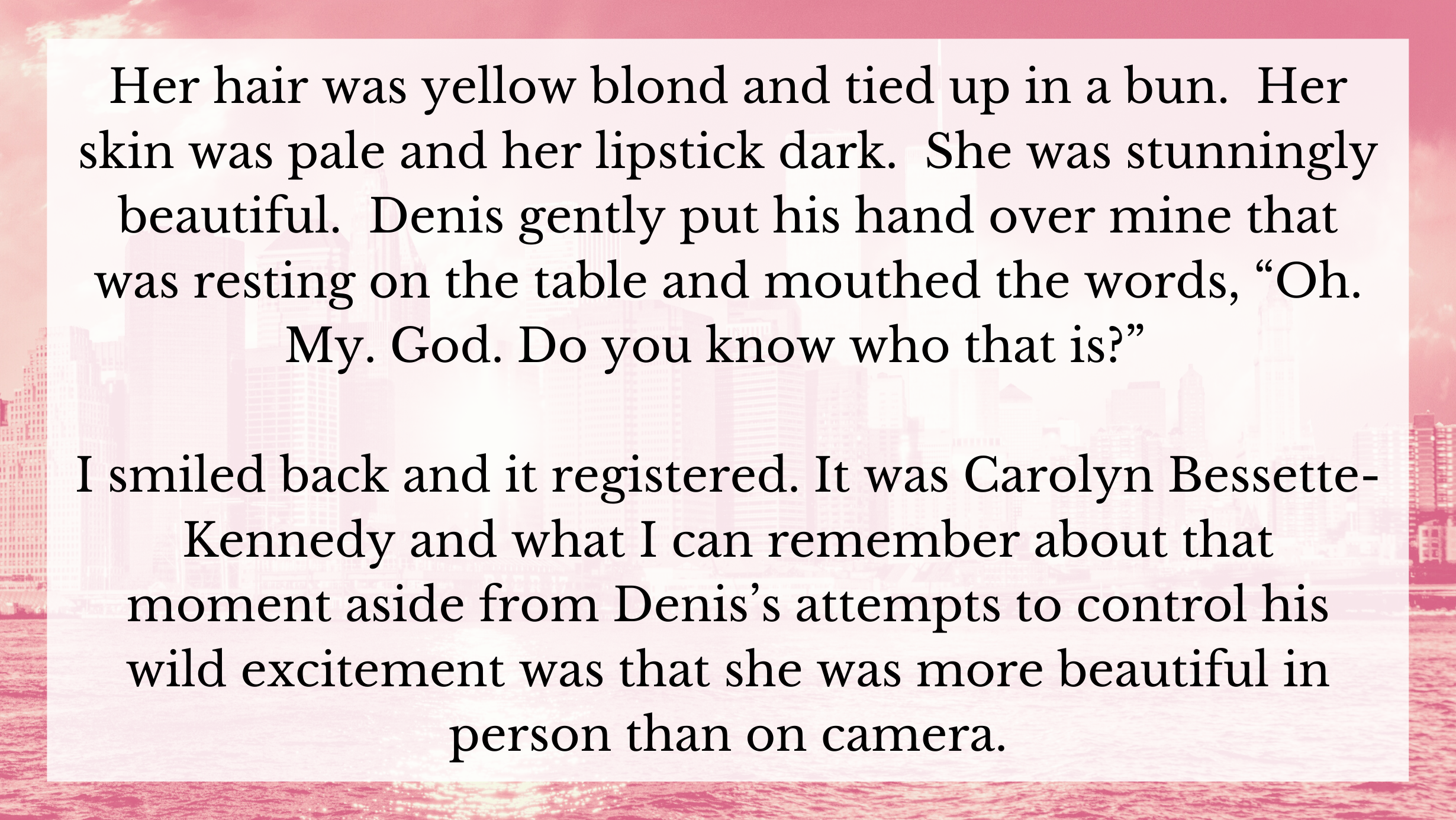 The hostess escorted us to a back room, past a curtain-type entrance that was away from the main room. This room was nice, but empty. I remember feeling relieved that it was empty. This was back in 1998. While New York City was kind of cool with the LGBTQ community, you still had to be careful. I was fresh from Texas and so getting used to doing anything where my gayness (like going on a date) was front and center always caused me mild anxiety.

We both kind of marveled at the place, I had the feeling of being in a rustic house somewhere. I remember Denis telling me that you had to know somebody because getting a reservation was impossible, but that he was glad he got one so we could enjoy it together. That’s when I turned to see a woman approach the entryway. She was wearing a little black dress and stood under the archway surveying the room before she sauntered down to the table right next to us.

Her hair was yellow blond and tied up in a bun. Her skin was pale and her lipstick dark. She was stunningly beautiful. Denis gently put his hand over mine that was resting on the table and mouthed the words, “Oh. My. God. Do you know who that is?”

I smiled back and it registered. It was Carolyn Bessette-Kennedy and what I can remember about that moment aside from Denis’s attempts to control his wild excitement was that she was more beautiful in person than on camera. Two other people soon followed and sat down with her.

I could see in Denis’s eyes and in his smile that he was over-the-moon with excitement by her presence, and then he entered the doorway. John F. Kennedy Jr. was standing at the doorway locking eyes on me! He studied me for what felt like twenty minutes, turned to look at Denis, and then walked to the table where his wife and company were sitting. He literally sat down in the chair directly behind mine. I thought Denis, whose face was beet red, was going to collapse from too much excitement at our good luck.

He began laughing, whispering to me that we haven’t even had our food yet and this was, by far, the best date ever!

We soon started talking about our lives. Denis, right from the start, was open, sharing deep and personal things about his life. His father died when he was young and that affected him deeply. He was devoted to his Catholic faith because it kept him connected to his father, but he wasn’t conservative. He told me my presence made him really comfortable, where he wanted to open up and share.  This is what I remember most about that evening. I don’t remember what we ate, but I remember appreciating that Denis was a deep soul. 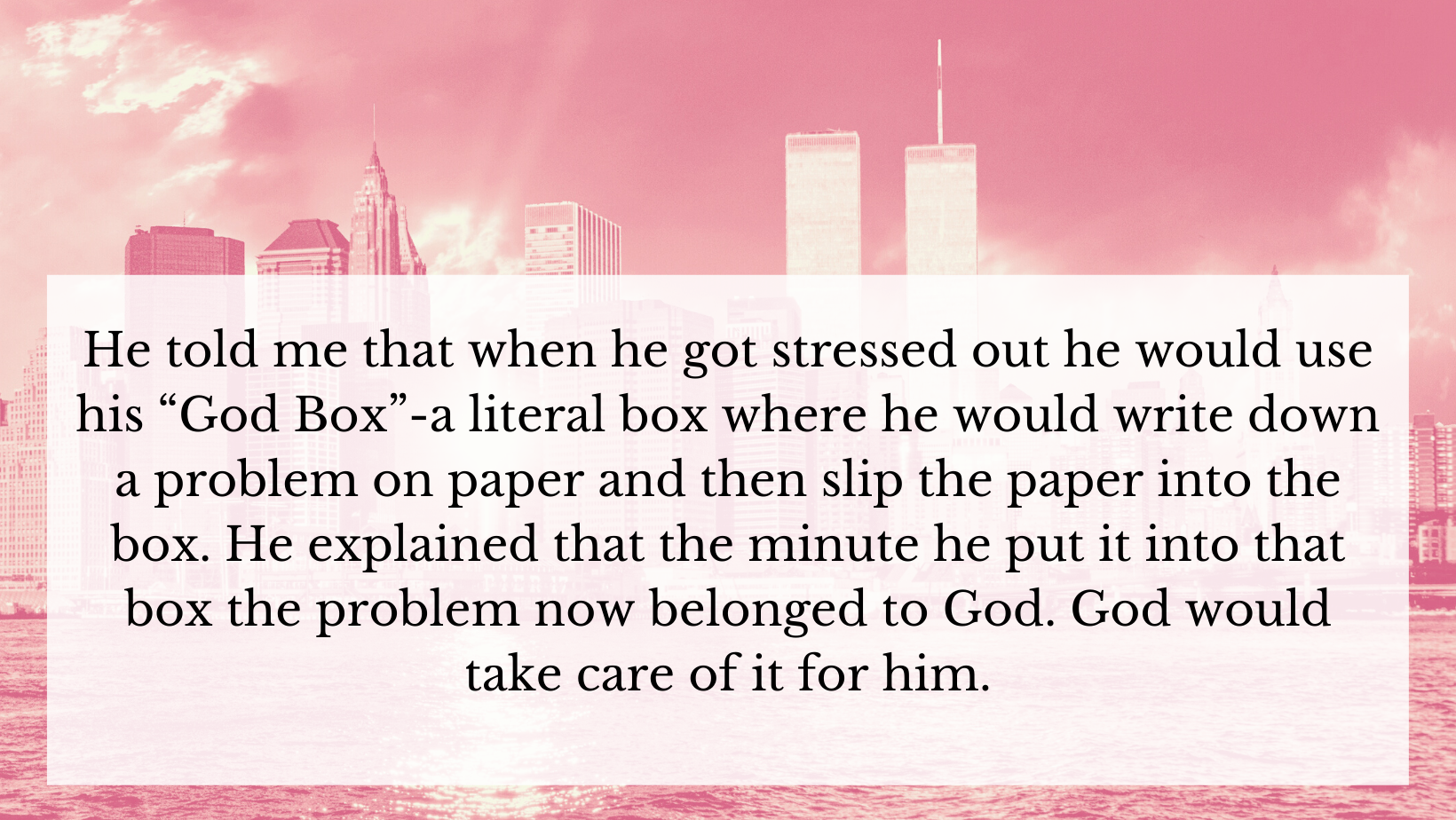 Denis took the Kennedys as a sign that there was something special about our meeting. I couldn’t have agreed more. I really liked Denis. He was in his early thirties and wildly successful but so unpretentious about it. He was also considerate, and hilarious. If you wanted to spend a night laughing so hard your sides would ache, Denis was the person to call. He asked if we could go out again. I didn’t hesitate to say yes. With that, he put me in a cab and kissed me good night. That evening was one of the first experiences in New York City where I felt seen and valued by another gay man.

We dated a few more times. I got to meet his friends and have some wild (and I do mean wild) adventures. He rolled out the red carpet for me and we had a lot of fun. He made that young chapter of my life so exciting. At the end of our time together we realized that we were going in different directions as people and we decided to become friends. In reality, we drifted apart fast.

A year or so later we would circle back. One Saturday night, we ran into one another at a party in the East Village and spent a good hour catching up. We had both become sober and realized we were running in the same gay circles. He looked radiant and healthy and still had that smile and a wonderful sense of humor. He was so happy to know that I had become sober.

We talked about life that night and about God. He told me that when he got stressed out he would use his “God Box” -a literal box where he would write down a problem on paper and then slip the paper into the box. He explained that the minute he put it into that box the problem now belonged to God. God would take care of it for him. It was his way of deepening his humility, patience, and faith in something greater than himself. I loved that and to this day still think about his God Box.

We also spoke on the day JFK Jr’s plane crashed into the Atlantic. I was working as a marketing assistant for a large corporation, and we had a product scheduled to be televised and discussed on a major morning talk show, but it had been sidelined to cover the tragedy. I remember being really stressed by that. It had created major problems for my marketing team. At the time, I was living in Chelsea and having some tea at The Big Cup when Denis called.

“Can you believe they’re gone?!” he asked me when I answered.

It was awful, but I was too consumed with my own problems. I started going on about how it messed up this big project I was working on and how stressed out I was. I remember him calming me down and gently telling me to take a couple of deep breaths and just remember that I was alive. “Life can change in an instant,” is what he said and for me to focus on the blessings.

Over the next two years, we’d run into one another at various events with mutual friends. Sometimes we’d flirt with one another only to realize one of us was dating someone and unavailable. Still, we had this thing where we’d ask one another, “Are you doing OK?” and we’d both answer with our eyes.

Denis was one of those people that made me rise higher. I wanted him to see me at my best because his energy was so positive. He inspired me and I loved running into him. We’d always have a good laugh and promised to call each other and make a date for dinner or lunch and have a proper catch-up as friends.

We never got there. 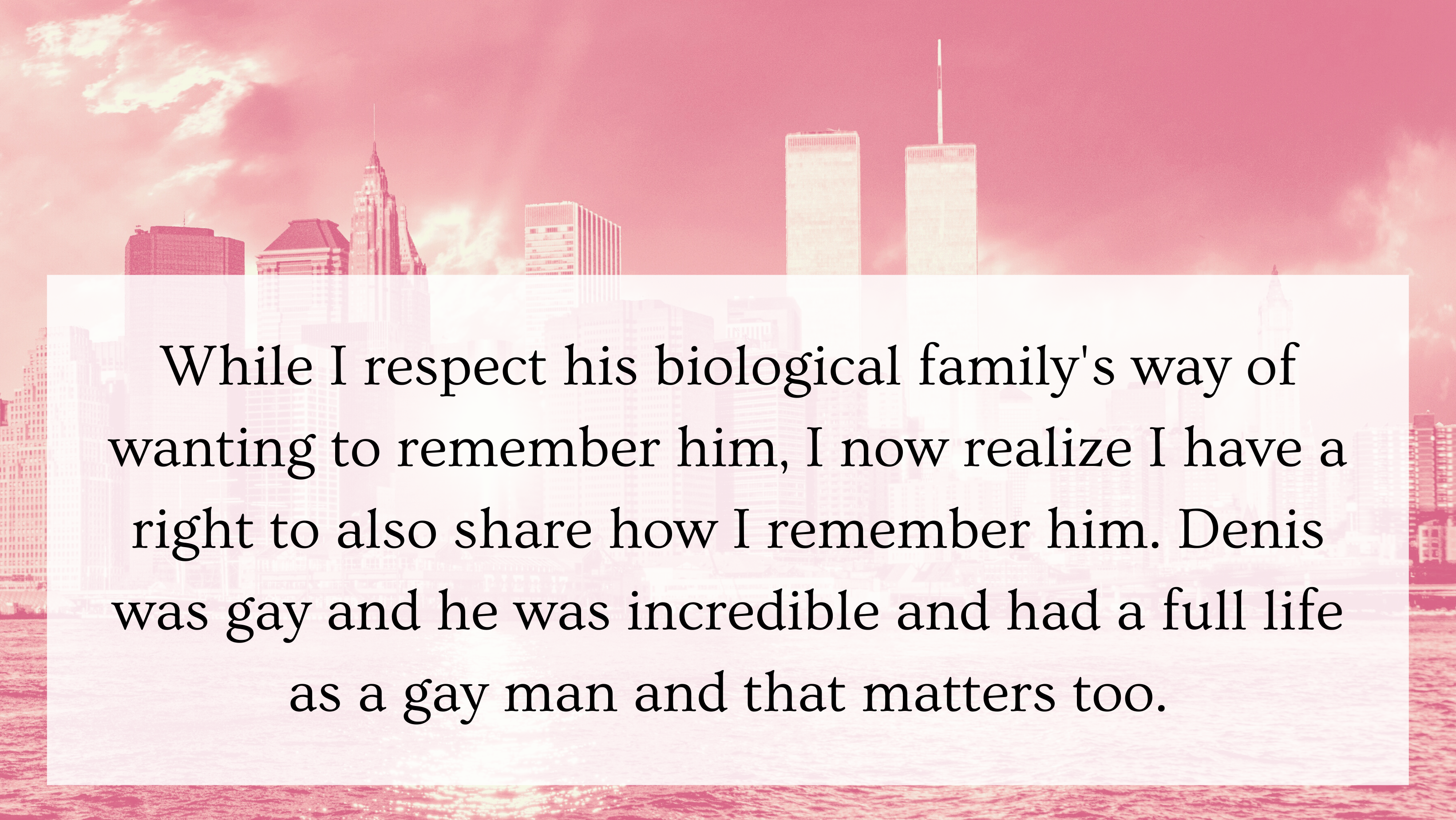 After 9/11, in October, I would find myself with other friends attending his memorial service at Saint Patrick’s Cathedral. I remember telling his mother how sorry I was and that Denis was truly a wonderful person. Afterward, I went to a diner with Denis’s boyfriend and some other mutual friends. That diner is where we would celebrate and share the Denis we knew, the one that wasn’t talked about at the Memorial.

While I respect his biological family's way of wanting to remember him, I now realize I have a right to also share how I remember him. Denis was gay and he was incredible and had a full life as a gay man and that matters too.

It’s been twenty years since life changed in an instant and my memories are becoming fuzzy around the edges, time is layering over time. Denis was a person in my life who deserves to be remembered. He played a brief role, but it was one that has had a lasting impact on me. He was a good human, soulful and he deserves to be remembered in all his various ways.

One more thing: I don’t believe in coincidences. In the weeks after 9/11, after we had exhausted ourselves looking for Denis, and finally accepted that he was truly gone, I inadvertently met my future husband, Glenn. It was during that short time in September when all of New York City had opened up, and people who had once been so guarded and hard suddenly became kind and vulnerable. It was a rare, magical window of amazing energy.

When I met Glenn I couldn’t help but feel Denis’s spirit all around me. It was like he had arranged the whole thing. It’s hard to describe, but I could hear him telling me, “Jeffrey, I went to a lot of work to make this happen. Get this right, this is the guy for you. He’ll make you really happy.”

Twenty years later we’re still together and I have this belief, deep in the marrow of my soul, that Denis had something to do with it because that’s the kind of person he was.

I had a friend named Denis, Denis J. McHugh III, who died twenty years ago in the attacks on September 11, 2001. He was gay, we dated and then later became friends and it’s important for you to know that because it’s how I and many other gay men knew him. He was an incredible person who mattered to me, still does.

Jeffrey Guard is the Editor for OUTSpoken, a community-driven blog produced by The LOFT LGBTQ+ Community Center. Jeffrey is also the Media and Marketing Specialist for The LOFT.