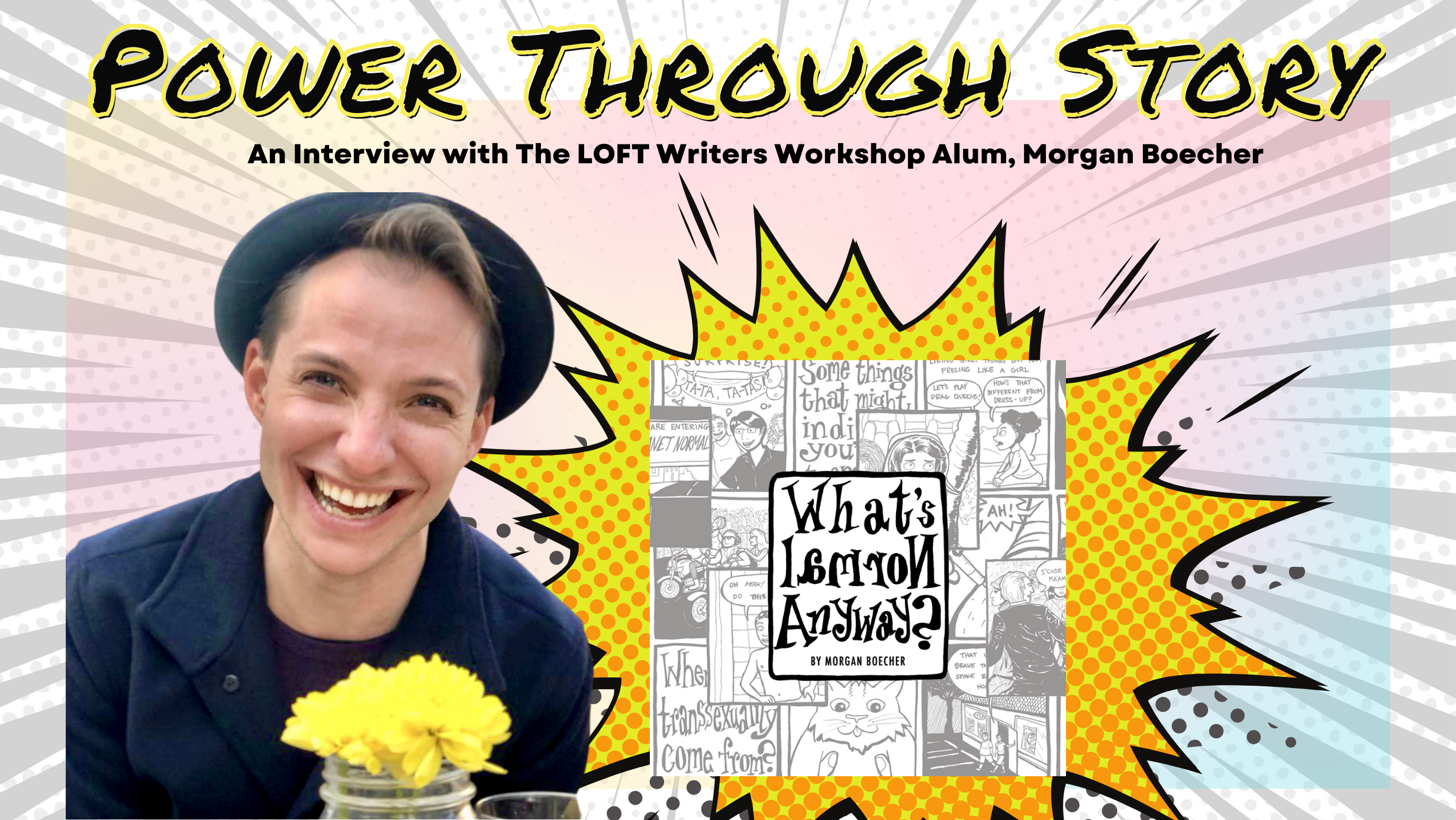 Morgan! It's sooo wonderful to catch up with you! You've been a dedicated member of The LOFT's Writers Workshop now for years and are nearing the completion of your newest graphic novel. Would mind sharing a bit about it?

Thank you! The LOFT Writers Workshop has been absolutely indispensable to the development of this graphic novel. I mean it – joining this group was a critical turning point for this project. Getting the words and drawings in front of generous and critical queer writers helped clarify what was resonating and what was off in ways I couldn’t have found on my own. Without question, their support made me a better artist.


The graphic novel, called Chicken Heart, is the story of Jackie Locklear, a lonely-hearted New York City stand-up comedian and trans guy who doesn’t want to confront that part of himself. That is, until he learns about the death of his estranged Aunt Sheila, who was also trans. Wanting to say goodbye after being apart for over a decade, Jackie embarks on a journey to Sheila’s funeral at the Chicken Heart Love Commune, an upstate woodland community of queer and trans folx that Sheila built. There, he struggles to process grief through humor while navigating an unlikely love life, all in the pursuit of answering the one question he keeps avoiding: can he be out and loved?

What inspires you to write?

I never see enough of myself as a complex queer trans person in culture and in the world. Creating stories is a way to find power and voice in that void. The stories I write get me close to whatever I need to feel – humor, joy, grief, hope. I know other people need that visibility too because they told me so when I started putting work out there. Few experiences have been as meaningful as hearing readers say that they thought they were the only ones with certain fears and doubts, yet here they are showing up in a comic strip. More than anything, connecting to people inspires me to write.

Your first graphic novel, What's Normal Anyway?  is also going through another edition, congratulations! For folx who may now know what is that book about?

Yay! I’m beyond thrilled that What’s Normal Anyway? still has a place out there. It’s a comic book that discusses a transmasc experience through the story of sweet, naive Mel, a character who takes the big risk of being himself and transitioning. The project started as a webcomic when I came out and started transitioning. Rebuilding an understanding of myself from the ground up was a pretty wild and absurd endeavor, I thought, so why not share it? The experience brought me all around the country giving talks, hosting workshops, and selling books, which was a fun way to claim space in a world that doesn’t default to thinking about trans people.

Why is it so important to have Trans love stories?

Trans love stories are crucial because you can’t fully participate in humanity without love. Yet love for trans people is more difficult to access on the whole. There’s no trick to it – loving trans people works the same way as loving any person – but in mainstream culture, gender-variant people are still so often placed outside of what’s lovable. Sure you can find acceptance and support if you live in a community that's open-minded enough. But love is real stakes. Love is putting your heart into someone regardless of how it makes you look in a judgmental society. It helps to see stories of desirable, lovable trans characters, for one because it’s an escape, but also because it builds culture that centers transness and the specific beauty only trans people have.

Your books resonate for so many in our community because they make sense of identity and the world around us--but are also hopeful. Do you find Transgender Day of Visibility to be a hopeful day, is there something about it that inspires you?

TDOV is so hopeful. Visibility is hopeful. I want to be visible even if it hurts because anything else is only a bigger heartbreak. At the same time, visibility takes privilege. Everyone has choices, but not everyone has had my choices or your choices. The most hopeful version of TDOV is one where we uplift those who would not have otherwise had the chance to be visible and believed in and loved.

We are only at the beginning of a Queer cultural renaissance, where Queer voices are finally being heard and recognized. What advice would you offer someone who wants to begin writing but doesn't know where to start?

If you want to make something, just start. Scribble nonsense on a blank page if that gets you going. Accept that it will start badly and you won’t like it. But then keep shaping it, learning more about your craft and your own heart, and moving with instinct instead of fear. Keep going, even if it’s slow. Persistence is worth way more than proliferation. Brick by brick, you build a house. Show it to people when you’re ready. Like I said, the LOFT Writers Workshop was a game-changer and helped me level up like you wouldn’t believe. Find what helps and after working at it, you will marvel at what you can create.

Morgan Boecher is a New York City-based comic writer/illustrator and arts marketer who tells visual stories about folx on the margins, particularly trans people. His first book WHAT'S NORMAL ANYWAY? (Scout Publishing, 2015) is a webcomic turned self-published Kickstarter success, and has been translated and sold to educators and readers internationally. As a speaker and a performer on queer topics, he has appeared at places such as New York Comic Con, Queers & Comics Conference, Flame Con, Columbia University, University of Florida, The Center in Manhattan, PrideWorks Conference, and National Out for Work Conference.