Who Gets To Be Queer On The Big Screen? Let Us Represent Us! 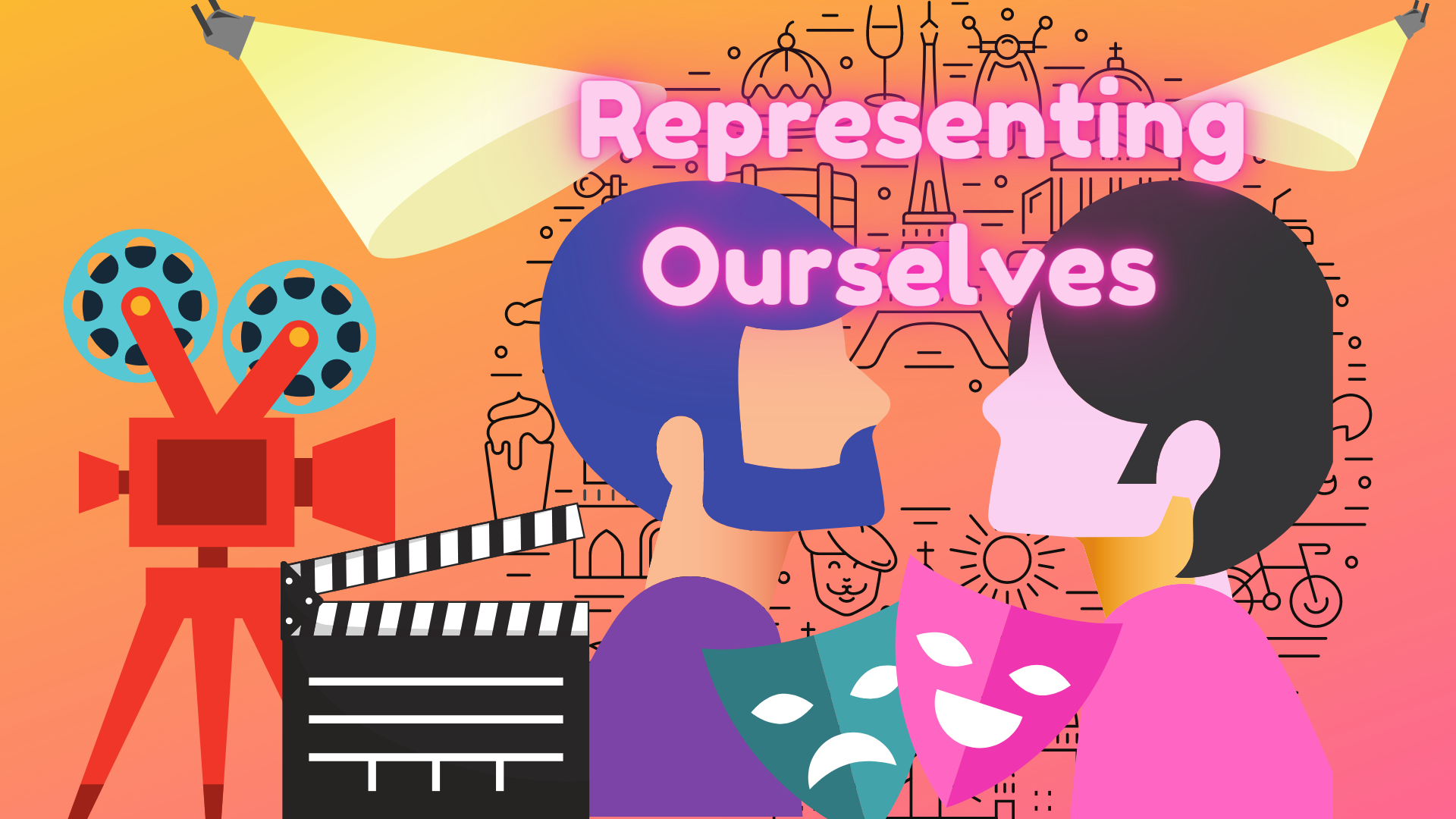 I am a former actor.

The role of an actor is to make an audience believe that the person behind the character doesn’t exist. In the head of an actor, it's really “I don’t exist, but my character."

It is truly one of the hardest skills to master. When a casting director is having an audition, one of the thoughts going through their heads is whether this actor can BE this character and make them believe the character is a real living being, not just a small description. 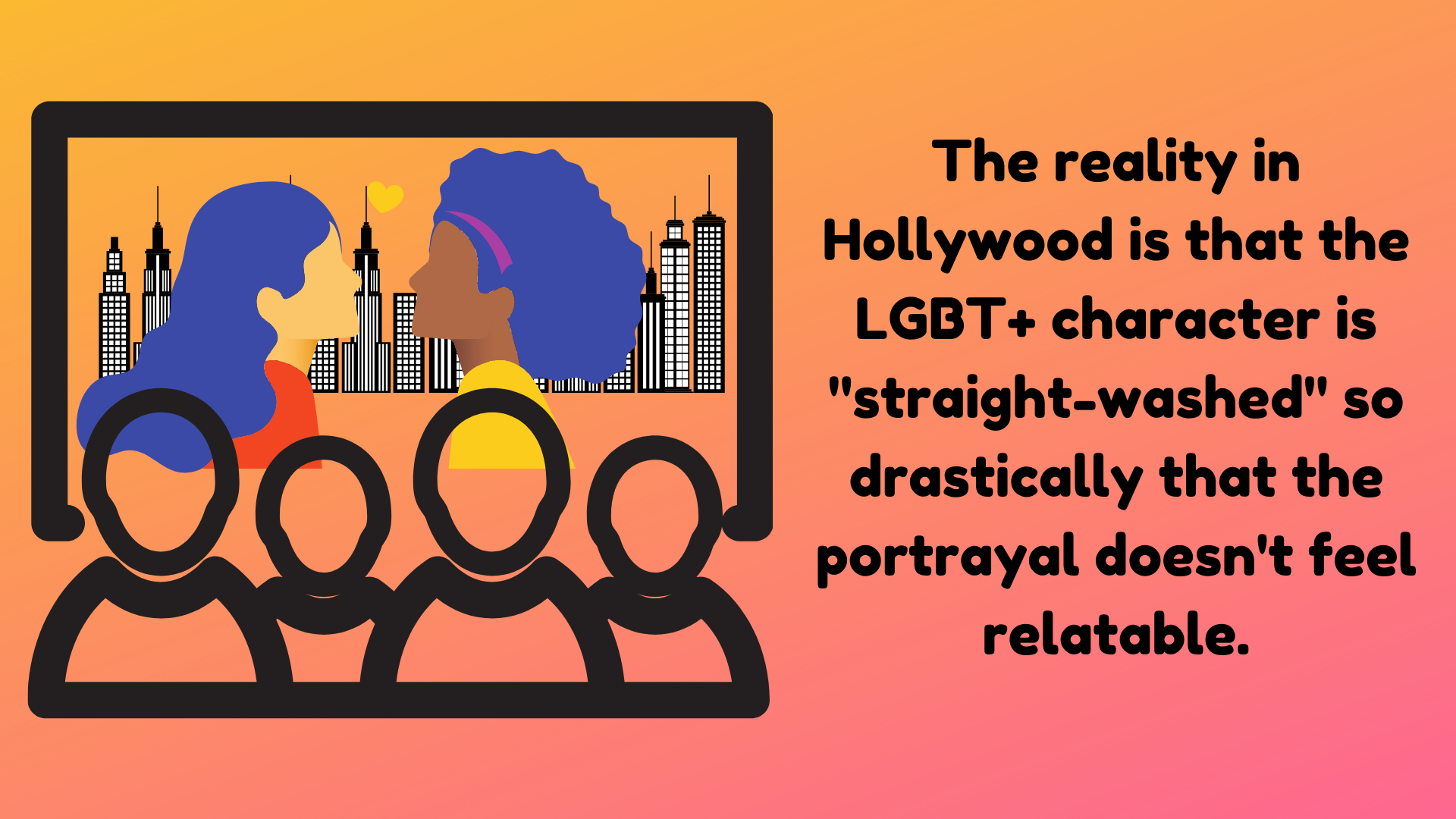 That’s why in acting classes; teachers will push you to be someone so different that you don’t exist.

An actress who doesn’t have a child will become a mother who is grieving the loss of one. An actor who does yoga will become a member of the mafia. Some Hollywood directors and casting directors are trying to say, “ Someone who is heterosexual and cisgender can accurately portray someone of the LGBT+ community and can tell their story.”

Some may argue “It's just one role, there must be so many LGBT+ roles out there”. While this statement holds some truth, the problem also involves the accuracy of representation. The reality in Hollywood is that the LGBT+ character is "straight-washed" so drastically that the portrayal doesn't feel relatable.  If a character is part of the LGBT+ community, the character should not be "toned down" just to make the character more palatable for straight audiences. 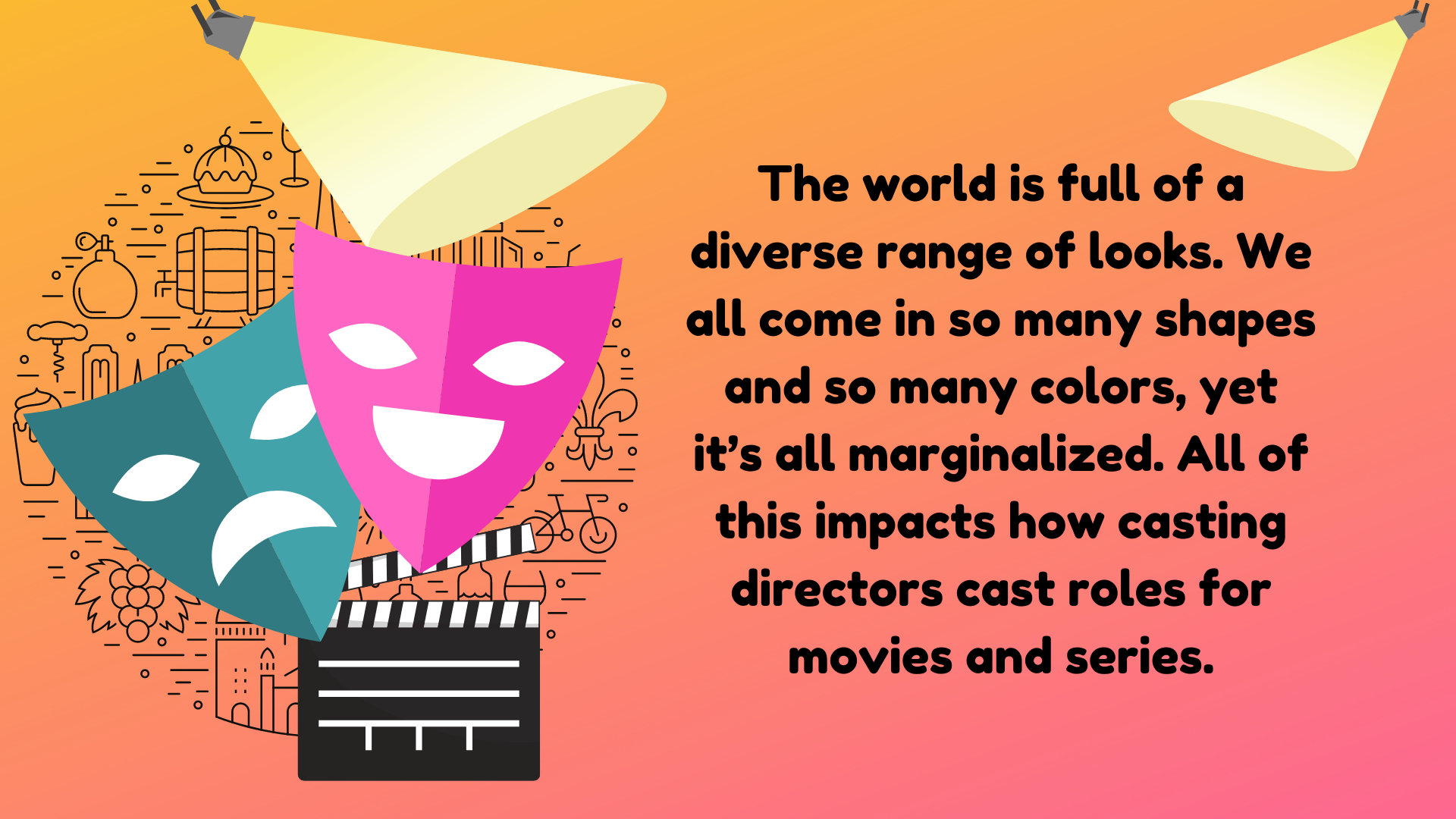 I have noticed in mainstream society (and with the LGBT+ community as well) that our standards of beauty are way too high. The world is full of a diverse range of looks. We all come in so many shapes and so many colors, yet it’s all marginalized. All of this impacts how casting directors cast roles for movies and series.

In both Love Simon and Love Victor, both Simon (Nick Robinson) and Victor (Michael Cimino) are fit twinks. Both of them are slim with a six-pack. NOT ALL PEOPLE OF THE LGBT+ COMMUNITY HAVE A SIX PACK!!! If I was younger (let’s say 13-14 and still in the closet) and I saw them on TV, one of my thoughts would be “ I must be skinny, and fit and have a six-pack to be happy and LGBT+!” On many levels, that’s messed up.

But the problem is that the TV and movie industry loves to feed their audiences with sexy attractive people, just like the old saying,“sex sells." 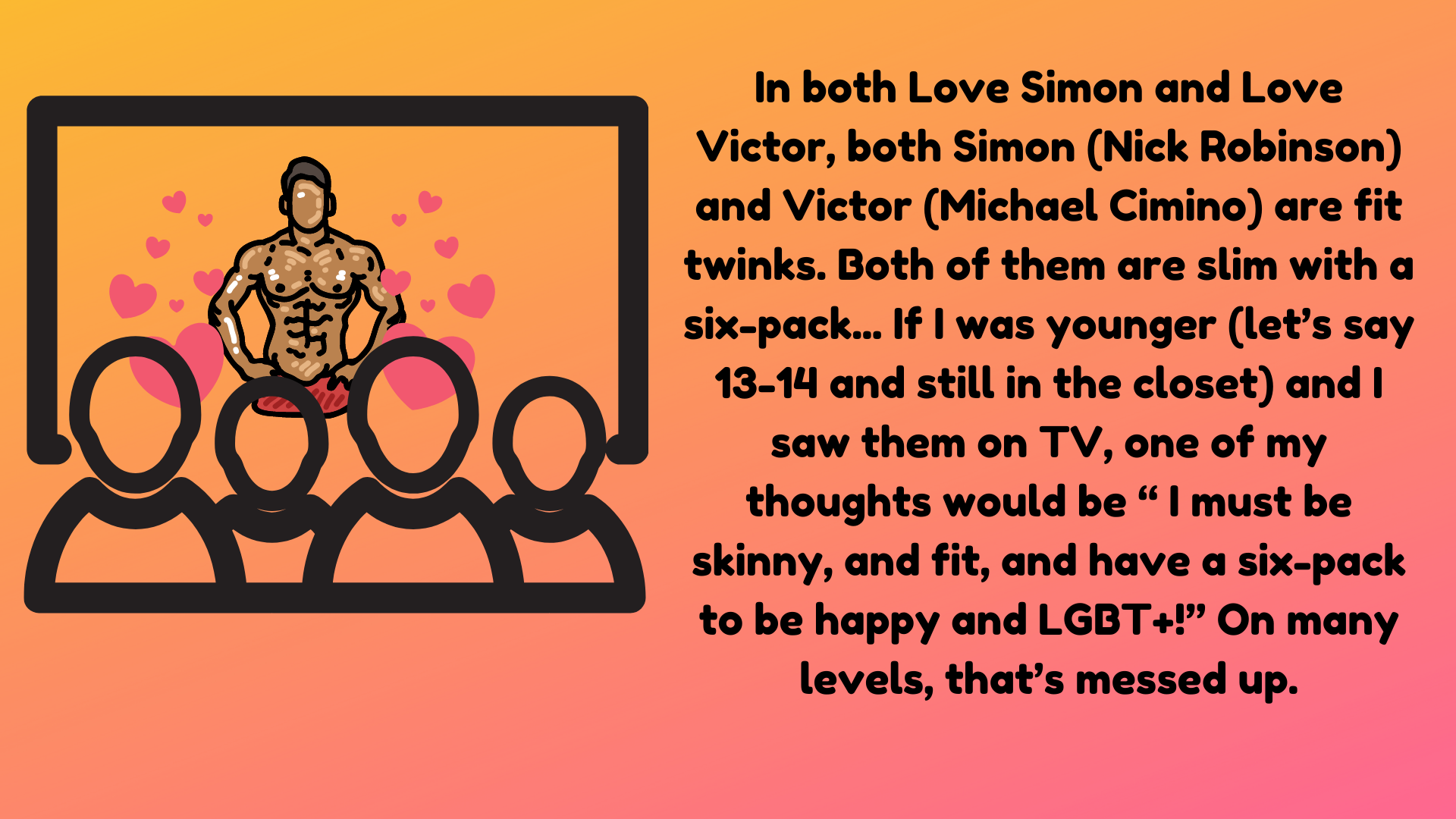 To portray that singular body type on TV is not realistic at all for LGBT+ or straight communities. The only LGBT+ characters that are not the body type of society’s standards that I can think of off the top of my head are Unique Adams from Glee (Alex Newell), Titus Andromedon from Unbreakable Kimmy Schmidt (Titus Burgess), and Damian Hubbard from Mean Girls from both the movie and the Broadway musical (Daniel Franzese and Grey Henson). The fact that I can only name 3 off the top of my head proves that Hollywood NEEDS to do better.

There have been many roles in TV and film that could (SHOULD) have been played by a LGBT+ actors and actresses. A lot of the most “iconic” LGBT+ characters such as Blaine Anderson from Glee (Darren Criss), Annalise Keating from How To Get Away With Murder (Viola Davis), Emily Fields from Pretty Little Liars (Shay Mitchell), Jack Twist from Brokeback Mountain (Jake Gyllenhaal) and so many more are actually played by straight, cisgender actors. But one of the people I listed above said he no longer will be accepting or playing LGBT roles.

Darren Criss said in an interview with Bustle Magazine, "There are certain roles that I'll see that are just wonderful, but I want to make sure I won't be another straight boy taking a gay man's role.” When I read this I was shocked, if more actors and actresses said this, Hollywood would be so much more diverse. 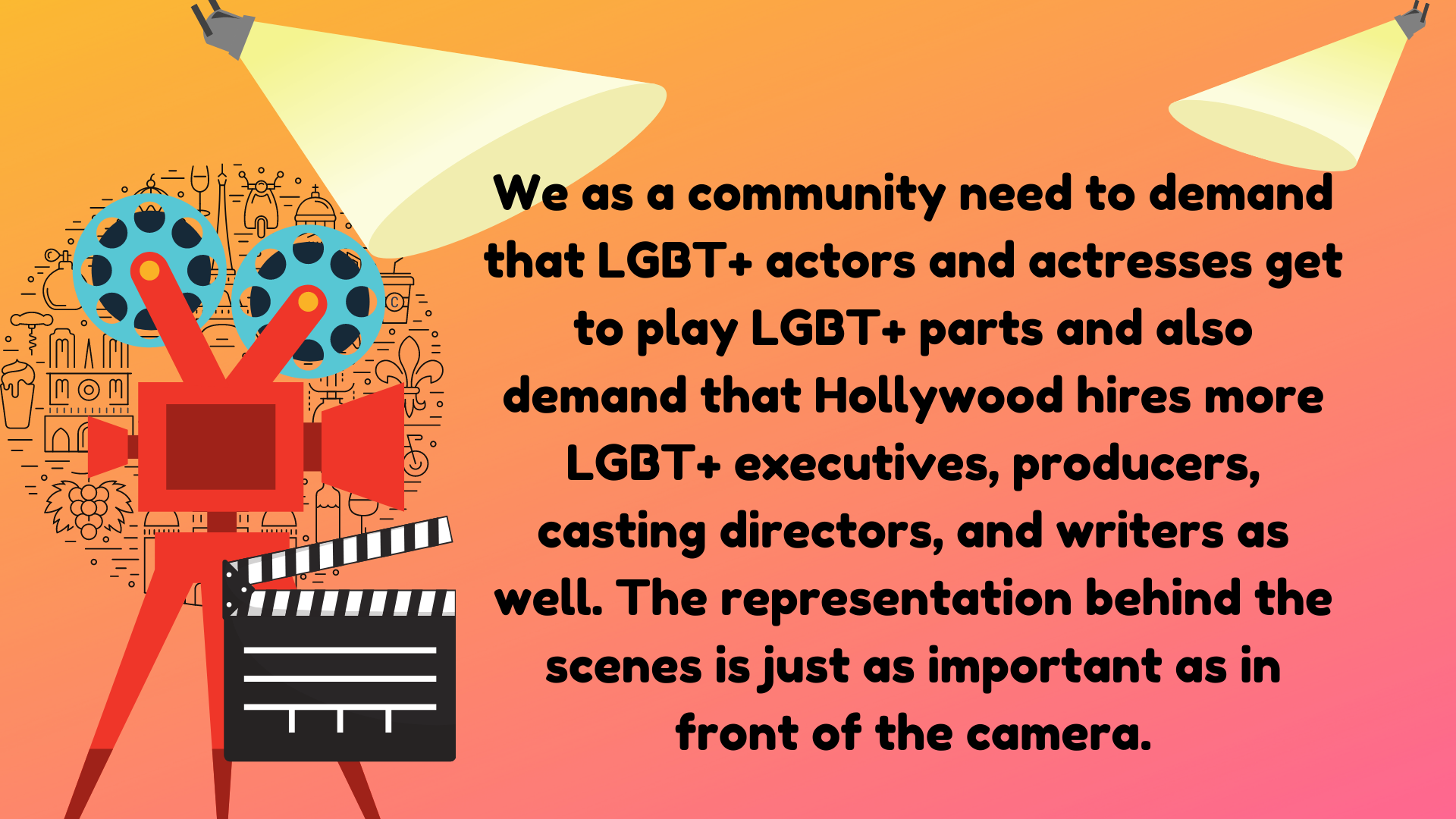 While there is still a fight to get more representation of the LGBT+ community, there has been some progress. Shows like Pose, RuPaul’s Drag Race, Euphoria, has brought more of the LGBT+ community into the limelight and into mainstream media. There are actors and actresses such as Laverne Cox, Sara Ramirez, Jake Borelli, Tommy Dorfman, Alex Blue Davis, and Elliot Fletcher that have been vocal about this issue, and that been playing LGBT+ characters on TV.

We as a community need to demand that LGBT+ actors and actresses get to play LGBT+ parts and also demand that Hollywood hires more LGBT+ executives, producers, casting directors, and writers as well. The representation behind the scenes is just as important as in front of the camera. We need to be able to represent ourselves on TV and in movies. We need to inspire future generations that it’s ok to be in the LGBT+ community. And that all starts with representation in front and behind the camera.

Evan "Evy" Emanuel is a 23-year-old gay femme man from Cortlandt Manor, New York. He is currently working at Ulta Beauty where he helps people find beauty products to help them shine! For more of his articles check out https://vocal.media/authors/evan-emanuel