Transgender Children Are Under Attack—The Time for Action is Now 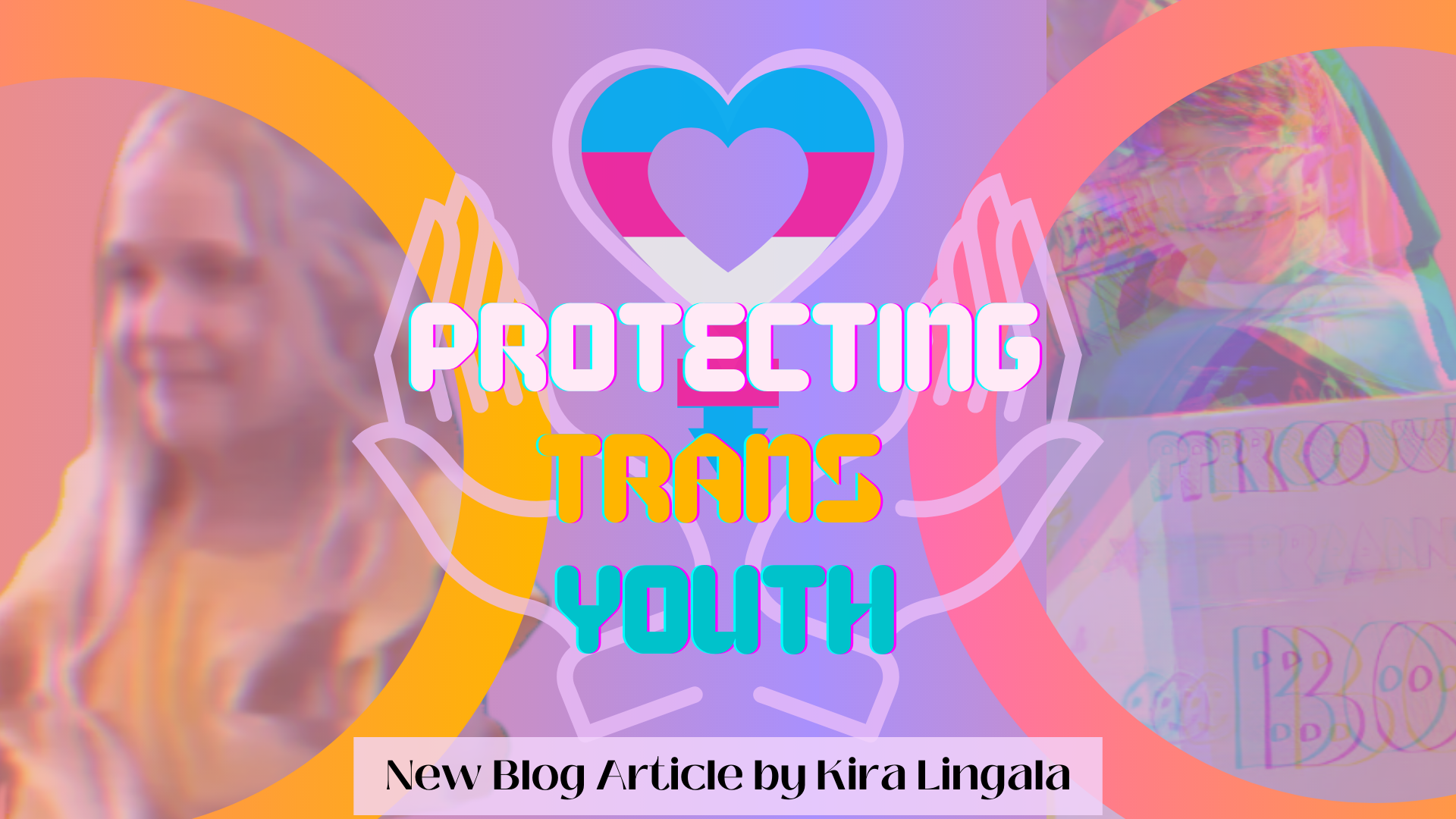 PROUDWST Me Peer Navigator, Kira Lingala examines the radical and extreme measures some statehouses are taking to attack Trans Youth

The bills can broadly be divided into two categories—those that target transgender girls’ participation in sports and those that seek to restrict access to gender-affirming healthcare for transgender youth.

Bills banning transgender athletes have been raised in over twenty states, but lawmakers across the country are often at a loss when asked for examples of transgender girls outcompeting their cisgender counterparts. One case of two successful transgender sprinters in Connecticut is cited often, but Shannon Minter, legal director of the National Center for Lesbian Rights, argues that it is only cited so often, because it is the only prominent example.

“It’s their Exhibit A, and there’s no Exhibit B — absolutely none,” Minter said. 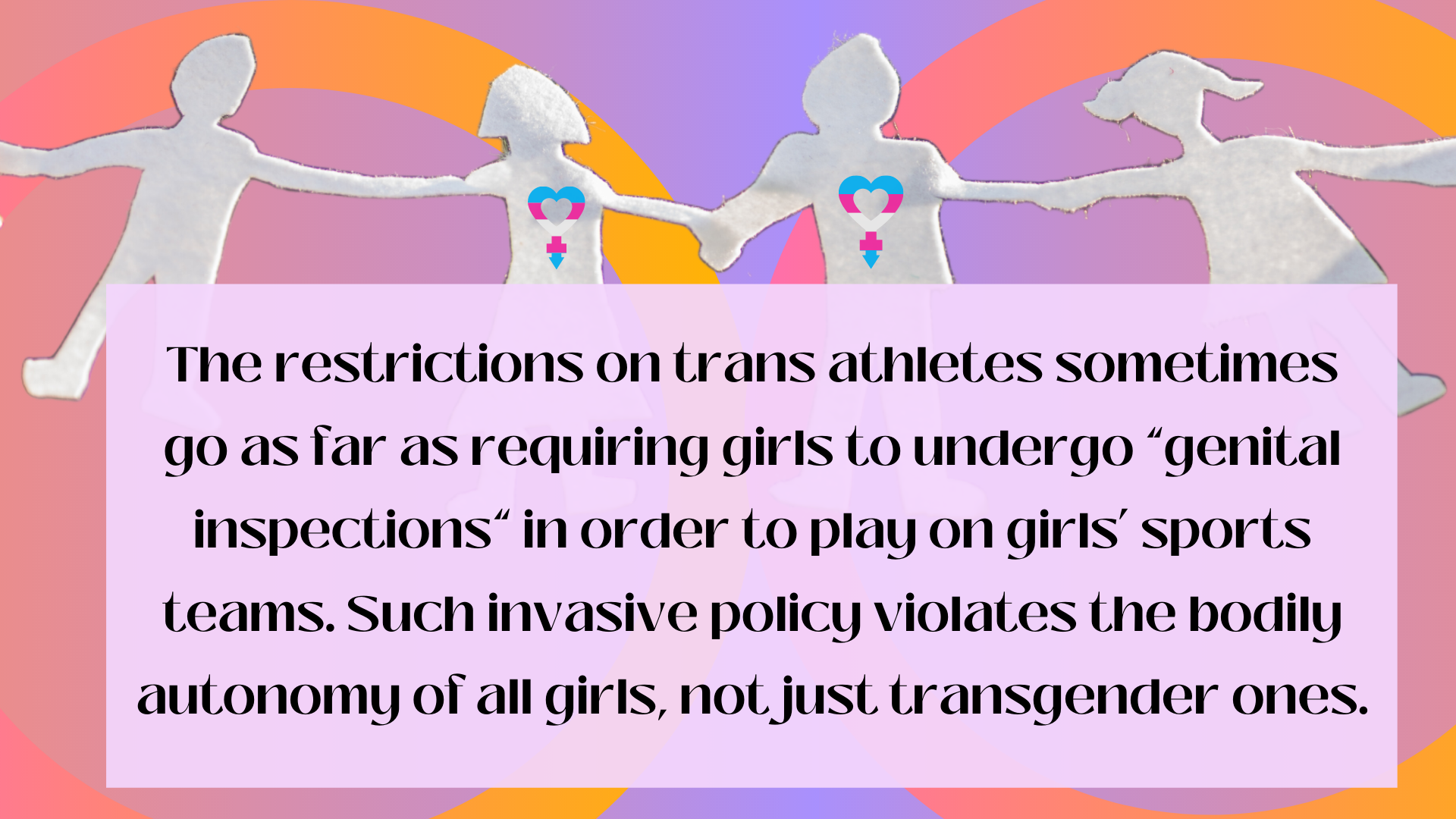 In Arizona, lawmakers are considering several pieces of anti-LGBTQ+ legislation, including a ban on student athletes competing “outside” of their assigned biological sex. Daniel, a trans student from the state, is standing up against the proposed restrictions, and e stressed the importance of an accepting environment for transgender athletes.

“Basketball has been so important for me, not just for making friends but also feeling like every other kid at school. I socially transitioned in the third and fourth grades, and for me basketball is where no one cares about my gender identity — they just see me as another player on the court.” 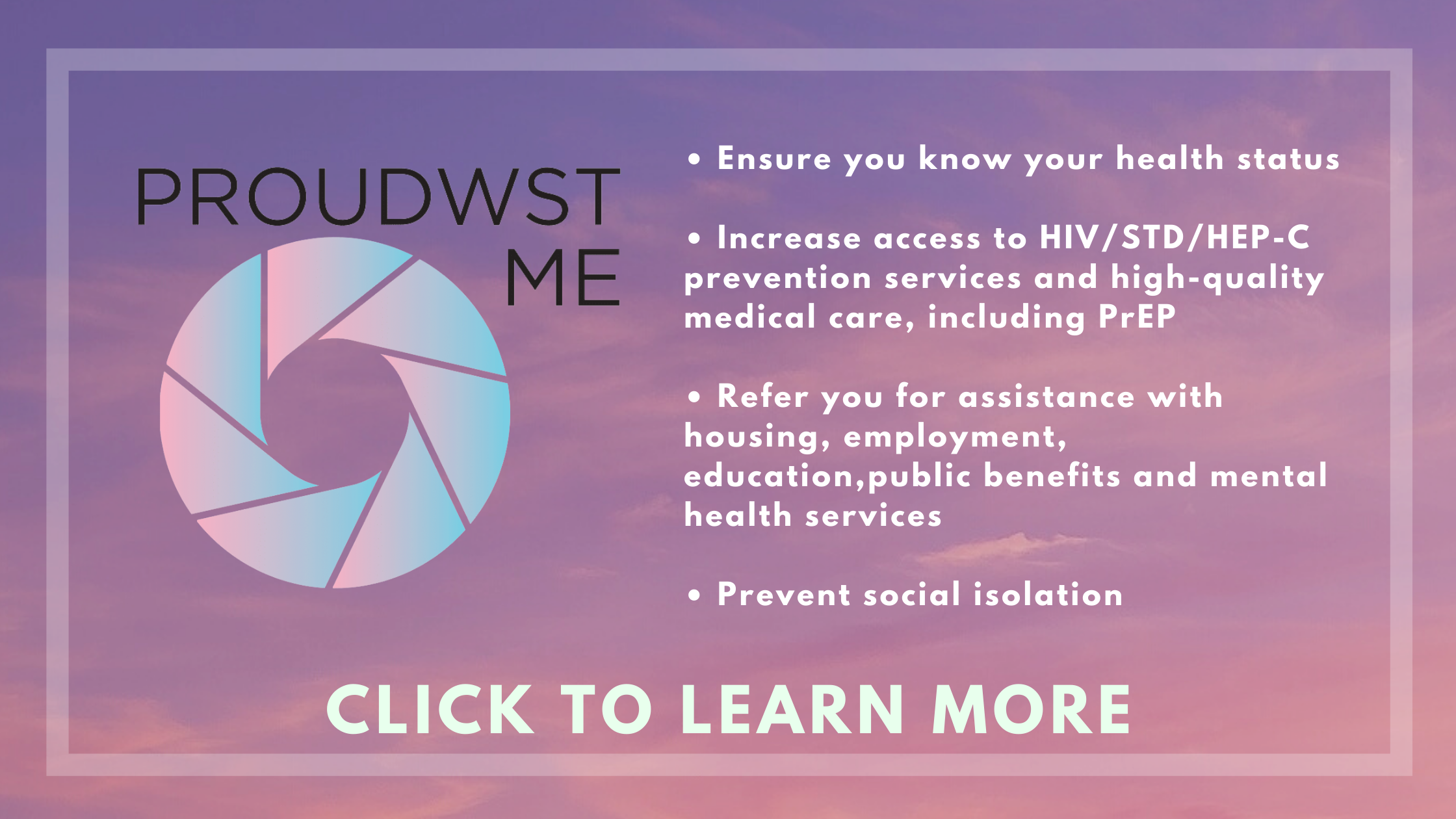 The restrictions on trans athletes sometimes go as far as requiring girls to undergo “genital inspections” in order to play on girls’ sports teams. Such invasive policy violates the bodily autonomy of all girls, not just transgender ones. When supporters of these bills claim to be supporting women’s rights and protecting girls’ ability to compete, it must be asked why they have chosen to force young girls to give up their privacy in order to participate. In Florida, the determination of which girls must undergo such an examination is left up to local school officials, allowing any girl who veers from traditional gender norms to be singled out and ostracized.

Even more invasive, and just as dangerous, are the category of bills restricting transgender youth’s access to gender-affirming medical care. These bills largely seek to impose restrictions by sanctioning doctors and medical professionals who prescribe hormones and puberty blockers to minors under 18. Some states impose a fine, but others go as far as to charge doctors who care for transgender children with a misdemeanor or felony. 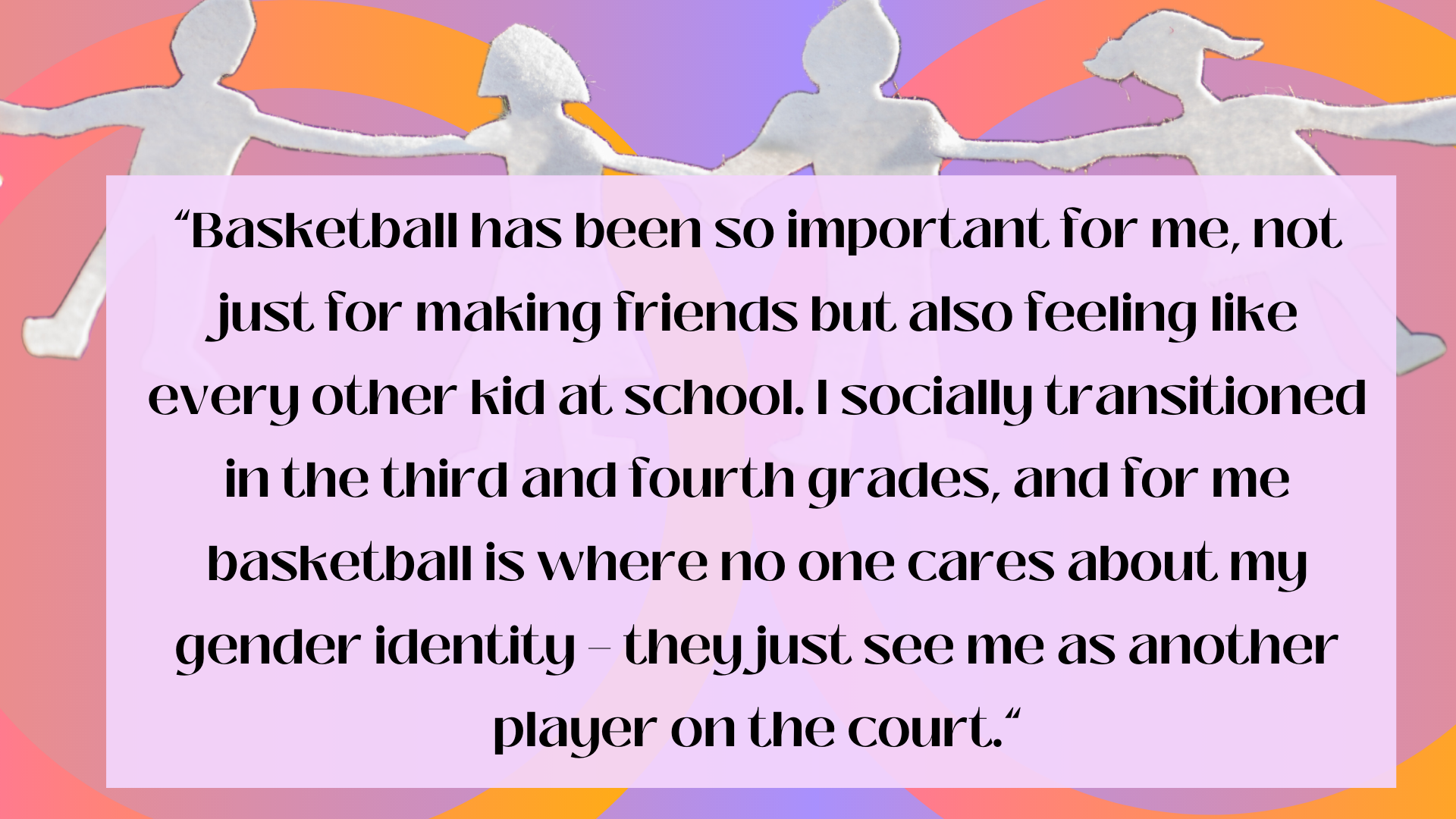 These bills prey on fears about transgender youth that are predicated on misinformation and misunderstandings about the dangers of gender-affirming care for young people. These fears have been stoked in publications as renowned as The Atlantic and by cultural figures as prominent as JK Rowling. Contrary to the views of those supporting the bills, the American Academy of Pediatrics has taken a firm stance in favor of protecting the rights of transgender youth, and their families, to make private medical decisions with the help of a doctor. 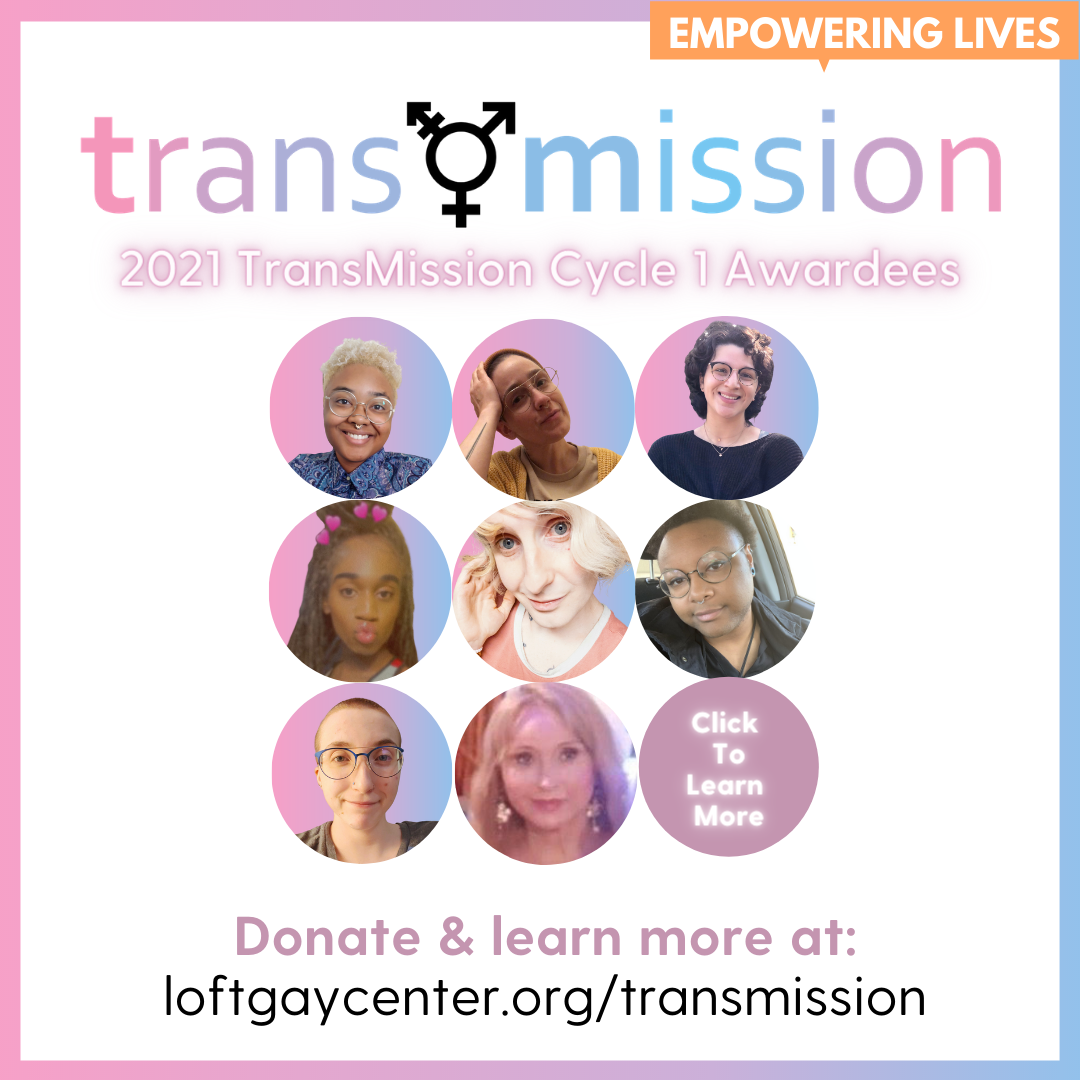 Proponents of the restrictions argue that medical interventions like puberty blockers are irreversible, likening this care to child abuse and criminalizing it as such. Such statements are simply not supported by the science of transgender health care and the best practices of doctors. Research has shown that access to puberty blockers and hormones can help reduce the risk of suicide among transgender youth. Now, doctors in states where restrictions have passed are worried about the wellbeing of transgender children and the prospect of an increase in suicide attempts and self-harm.

“I spent the first few years meeting with counselors who helped me navigate my gender identity and begin to socially transition. It wasn’t even until I turned 14 that I was able to get hormones, and even then the amount prescribed wasn’t that much, but the emotional difference it made was incredible. I felt more like myself than ever before. The care trans kids get allows us to be healthy and safe, to create a path so that in the future we can make our own decisions,” Jeremiah said. 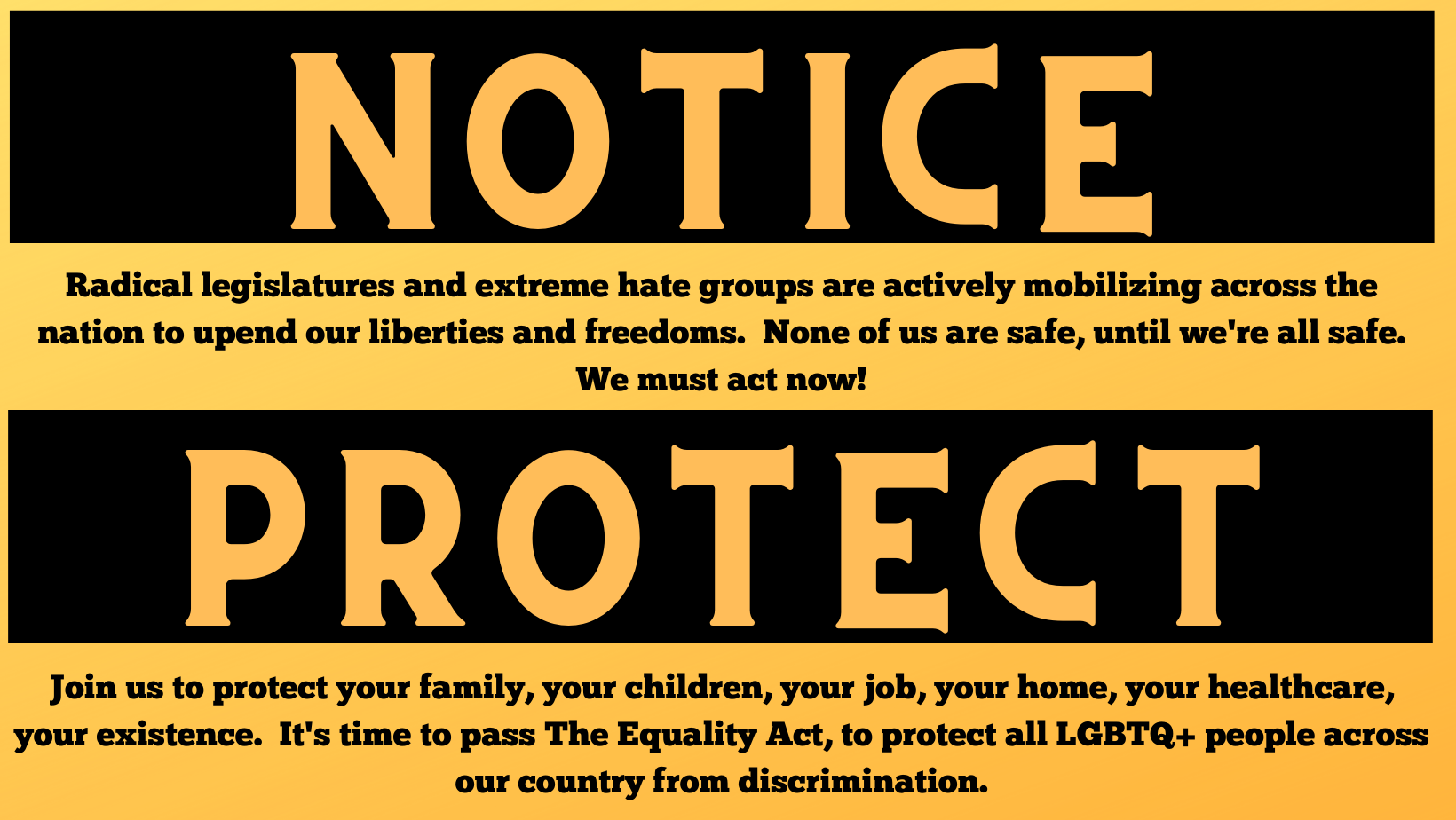 This is why it’s so important to remember that these bills are not abstract culture war debates or political sideshows. Real children and families are being impacted and having their right to control their bodies and their healthcare restricted. Real children are being prevented from taking part in an essential part of their school experience.

One silver lining to this wave of anti-trans legislation is that popular support for these measures remains low. Over 87% of voters in the ten swing states support the rights of transgender Americans, and when voters were asked to prioritize political issues, banning transgender students from sports ranked dead last. Across the United States, over 65% of Americans say they oppose both bills limiting access to gender-affirming health care and bills banning participation in sports for transgender youth. In addition to the lack of popular support for these bills, major US corporations have voiced their opposition.

Despite this, bills in many states are moving forward and media figures like Tucker Carlson and Laura Ingraham have ruthlessly criticized those who stand in the way. Republican Governor Asa Hutchinson, for example, was admonished by members of his own party for vetoing an anti-trans bill in Arkansas. Shortly after, the state legislature overrode his veto and passed the bill. 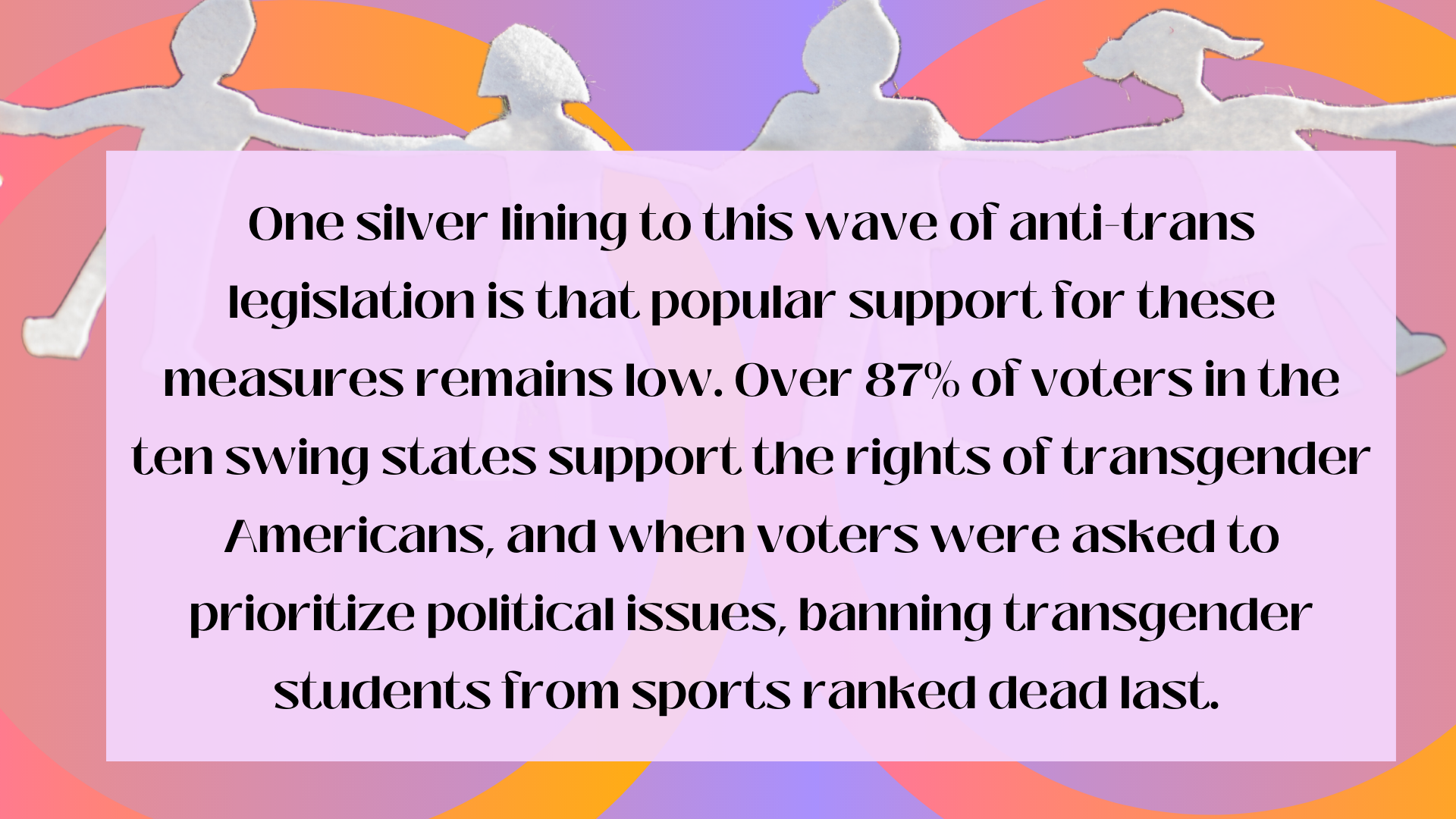 This is not the first time we’ve seen a backlash to LGBTQ+ rights. In the late 1990s and early 2000s, a wave of over 30 states passed constitutional amendments limiting same-sex marriage to some extent. President George W. Bush took on the issue of banning or limiting same-sex marriage as part of his 2004 re-election campaign, hoping to solidify the support of conservative religious voters. Political analysts on the left and right argue that it worked, creating a wedge issue that drove turnout among Bush’s base.

Six years after the Supreme Court case Obergefell v. Hodges made same-sex marriage the law of the land, it is sometimes easy to forget just how intense the opposition to LGBTQ+ rights was. The progress made in the decade between the 2004 campaign and the pivotal Supreme Court case is staggering in retrospect, a result of over 45 years of sustained action by courageous LGBTQ+ activists.

While the tendency of history to repeat itself can be frustrating, we can also draw hope from the lessons learned in the fight over same-sex marriage. Like same-sex marriage, transgender rights have popular support, with polls consistently showing a vast majority of Americans support protections for trans folx and equal access to healthcare. These positive signs are buttressed by the efforts of the Biden administration, which has passed executive orders strengthening protections for transgender Americans. 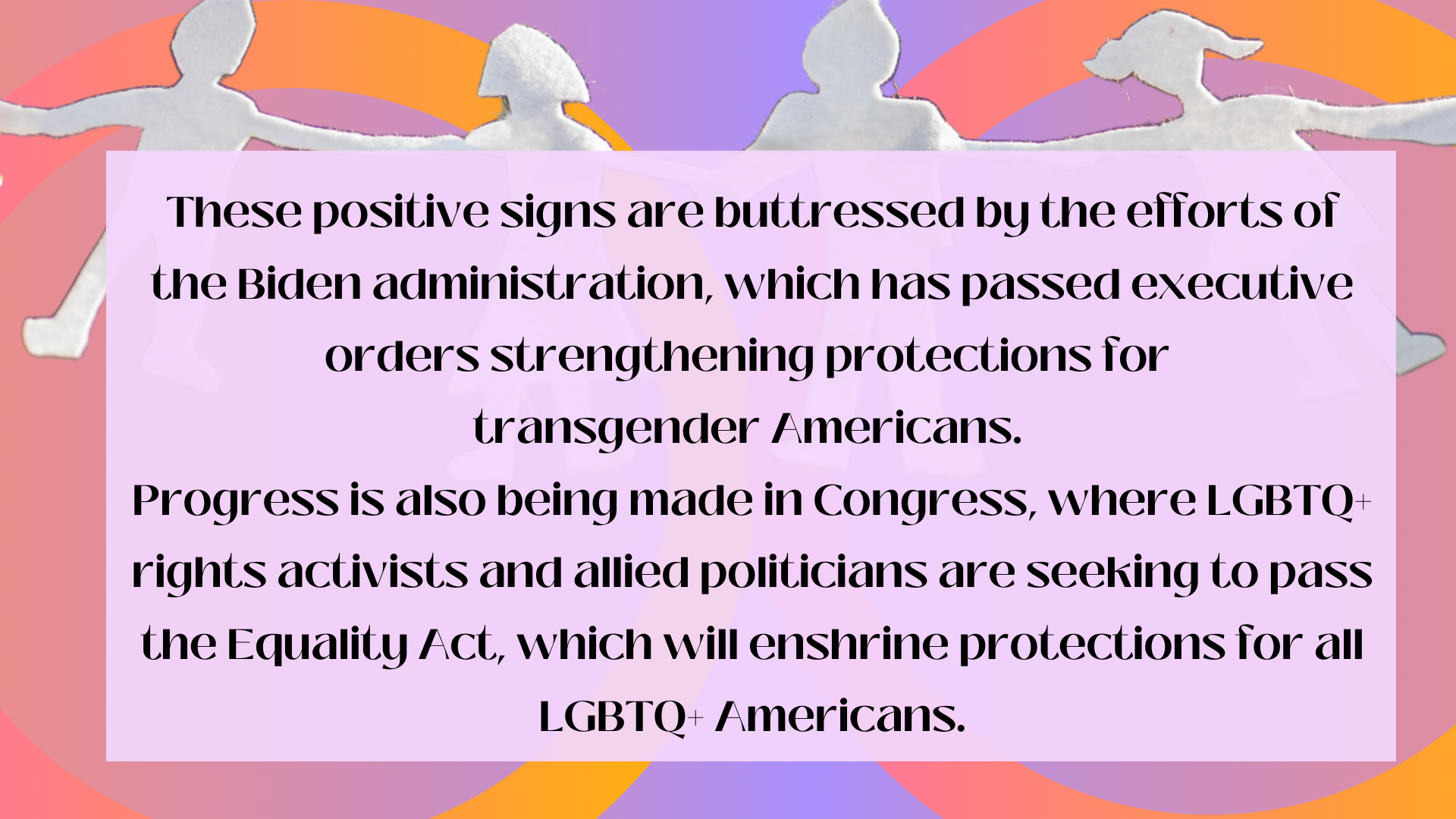 Progress is also being made in Congress, where LGBTQ+ rights activists and allied politicians are seeking to pass the Equality Act, which will enshrine protections for all LGBTQ+ Americans. These efforts need our support, if only for the sake of the transgender youth across the country who stand to lose crucial protections as a result of anti-trans state legislation. The LOFT is a proud supporter of the Equality Act and you can get involved in efforts to pass it here.

In the past week, transgender children and their families have shared heartbreaking testimony in the Texas legislature, as they fight against the draconian SB 1646 and SB 1311, which could criminalize parents who seek gender-affirming care for their children. Their words remind us that the efforts of anti-trans lawmakers across the country are not about protecting children or safeguarding womens’ rights. The nearly 120 bills across 33 states violate the privacy, safety, and autonomy of transgender children and children of all genders who will be subject to invasive practices and draconian punishments. The LGBTQ+ community has been fighting for freedom, safety, autonomy, and recognition for decades. It is more important than ever that we come together to fight hate and protect the most vulnerable among us. No child should feel ostracized for who they are or prevented from being themselves. The time for action is now.

Kira Lingala is the Peer Navigator, for PROUWDWST Me, The LOFT's health and wellness program designed specifically for the Transgender, Gender Nonconforming and Nonbinary communities.